Clearing the air about recent developments

Much ado has been made about the letters that the Willets Point businesses were supposed to receive last Thursday notifying us that a hearing pursuant to NYS Eminent Domain Procedure Law would be held this upcoming June 22nd.

No one at the Iron Triangle received these letters this past Thursday or Friday. We're sure we'll get them eventually, but not when the EDC said we would. This is yet another blow to their credibility. 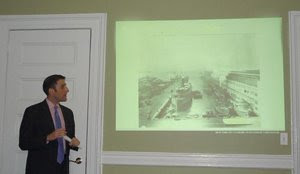 Seth Pinsky himself stated multiple times in front of a roomful of people on April 6th (pictured) that the EDC would rather negotiate than invoke eminent domain. And in his press releases, he always says the same thing: “We will continue to work with the remaining land owners and businesses as we move forward with our plans to transform this blighted area into a center of economic opportunity and job creation and a 21st century neighborhood.” Yet...

First, let's not forget that Mayor Bloomberg himself stated that "it's not fair to say it's blighted."

The EDC called most of the property owners and told them that they would not be negotiating with them for at least a year (not enough money is available at this time to negotiate with everyone).

The EDC waited 5 months after the City Council's November 13th vote to make deals with 2 property owners in the part of the Triangle that is eyed for development in the first phase. No other deals have been made during this period of time.

No members of Willets Point United have made deals since formation of the group in January of this year and none of us have been called by EDC to do so.

The City Council vehemently stated that eminent domain was not to be used until all other options were exhausted and not against a majority of property owners. Thus far, only a handful of property owners have made deals to stay, move or sell. Councilman John Liu brought this up recently when asked by a reporter.

There are two current legal actions that affect us - one which our members brought that challenges the environmental review findings produced by the EDC and the other by WPIRA against the City for failing to provide general services like roads, sewers and sanitation to the Triangle for many years. These decisions, with their inevitable appeals, will likely take years.

The EDC can send out all the press releases it wants and do their best to harass the hardworking business people of Willets Point; it's blatantly obvious that we will be staying where we are for a very long time because the City has chosen to act in bad faith.
Posted by Willets Point United at 8:46 PM