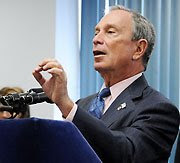 Excerpt from "Bloomy to Bruce: Enough already," by Mike McLaughlin of The Brooklyn Paper (May 21, 2009):

Mayor Bloomberg dealt Bruce Ratner a blow on Wednesday, saying that the city would not subsidize the Atlantic Yards project with additional public funds.

The city has already pledged $230 million for infrastructure and land-acquisition costs at the embattled arena and skyscraper project — but Bloomberg dashed Ratner’s hopes for more.

“We’ve done everything,” he said in response to a reporter’s question at his daily availability on Wednesday. “We’re going to have a tough time balancing our budget.”

The mayor did add that the city needs the project, but said, “We’re not putting money in. We’re going to invest our money in better schools and in safer streets and in better parks and everything else.”

So why not do the same thing at Willets Point? Invest in streets and sewers and let development take care of itself.

Photo from The Brooklyn Paper / Tom Callan
Posted by Willets Point United at 9:58 AM