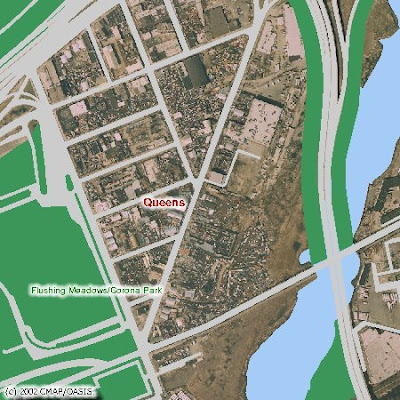 From a 2005 article from New York News Network:

Some of the same sources of power that Robert Moses wielded, if a bit revised, are now being deployed...

Most of the waterfront property along the Flushing River is owned by the MTA, with most of the balance of Willets Point privately owned.

In the Ratner and Willets Point projects, the City may use its power of eminent domain to seize the territory. Mayor Bloomberg has even suggested that the Willets Point property is too valuable to leave to the smaller scale businesses now occupying the land.

This attitude was criticized by the Neighborhood Retail Alliance:

Upcoming is the battle over Willets Point where the mayor’s observation that “the land is too valuable for the businesses that are on it” should be seen as an apt expression of his economic development policies vis-à-vis small business.

The Times Ledger carried the following quote back in November 2007:

"I believe they deserve to be in business. I believe they should be relocated. But I also believe they are sitting on one of the most valuable pieces of property in the city," [Claire] Shulman said.

Too valuable for us? Well, we bought it legally. If they really wanted growth at Willets Point, they would have provided infrastructure here which would have allowed businesses to expand and thrive. After all, Shulman had 8 years as Borough President to do so and Bloomberg had another 8 years as Mayor to do so. But they would rather see one of their rich developer friends get richer.

What do you have against property rights, Mayor Bloomberg and Claire Shulman? What if we said that your property was too valuable for you to own? You'd fight us, right? Of course you would. So you can't blame us for fighting against your greedy land grab.
Posted by Willets Point United at 12:40 PM