Where will EDC relocate businesses to? 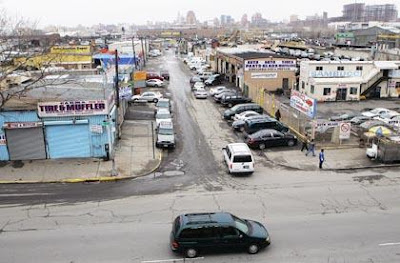 This week's Whitestone Times contains an article by Stephen Stirling about the discriminatory nature of the Flushing Airport deal made with Community Board 7.

Property owners said this week that a city pledge to bar Willets Point businesses from future development at Flushing Airport is discriminatory, although the city Economic Development Corp. says it never planned to move businesses to the former airstrip in the first place.

Last week, the EDC struck a compromise with Community Board 7 leadership on its future plans for the College Point Corporate Park, which includes the former airport.

The city not only agreed to permanently protect eight acres of the 25−acre Flushing Airport site from any major development, but also added a stipulation that no Willets Point businesses would be moved to the remaining 17 acres in the future.

“I think it’s discriminatory,” said Jerry Antonacci, co−owner of Crown Container Co. and president of Willets Point United Against Eminent Domain Abuse. “I think they have no right to say that and I think it’s foolish to say that.”

Reached for comment, the EDC said the Flushing Airport site has never been seriously eyed as a relocation point for Willets Point businesses, despite rumors to the contrary.

The EDC said even if development is possible on the remaining 17 acres, putting infrastructure in place to sustain development would likely be an expensive and lengthy process, which it said would not accommodate near−term relocations from Willets Point.

Antonacci noted, however, that the EDC has previously said the amount of city−owned land that can accommodate industrial and manufacturing uses, like those at Willets Point, is small and cautioned that shrinking the limited inventory of sites is short−sighted.

“They already admitted they have no land. And if they just took this land off the table, what are you going to do?” he said. “I think it’s going to come back and bite them.”
Posted by Willets Point United at 2:07 AM