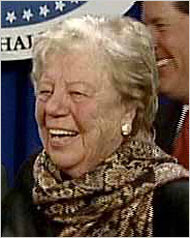 Looks like the tide may be turning in our favor in the Willets Point saga. The NY Times printed an explosive expose on illegal lobbying by Claire Shulman, funded with taxpayer money by Mayor Bloomberg. From New York Paid to Lobby Itself, Group Claims, By RAY RIVERA, Published: August 20, 2009:

Half the group’s revenues came from the Economic Development Corporation, which is also barred from lobbying. The other half came from corporate sponsors, including the Mets organization, which has long eyed the property, and several developers and construction firms that are expected to vie for lucrative redevelopment contracts when the city puts out requests for proposals in coming months.

Last November, the City Council voted 42 to 2 in favor of the plan, which authorizes the city to use eminent domain to remove the various auto repair shops and salvage yards that occupy the 62-acre portion of Queens. A group of business owners is suing to stop the city.

“They knew what they were doing,” said Gerald Antonacci, the leader of Willets Point United and the president of Crown Container, one of the area’s more than 250 companies that will be required to move when construction begins. “This was all planned out. They knew she was hiring lobbyists. This wasn’t a mistake.”

The attorney general’s office is reviewing the complaint. In recent months, the office has been looking into lobbying by local development corporations, and has identified a “small but not insignificant set” of groups that appear to be improperly lobbying, said a person briefed on the attorney general’s initial review.
Posted by Willets Point United at 11:18 PM

What our EIS challenge focused on

This is from the Crain's insider, published Thursday, August 20th, 2009:

Tomorrow, for the first time, opponents of the Bloomberg administration’s Willets Point project will make their case in state court. Their attorneys will say the environmental impact statement for the proposed redevelopment has gaping holes, notably a failure to address the effect on the Van Wyck Expressway.

“This is going to cause traffic problems of unprecedented proportions that will stop emergency response vehicles in their tracks,” says Nelson Johnson, counsel at Arnold & Porter and a specialist in environmental law. “The [impact statement] did not consider it at all.” A comprehensive study is mandated by state law.

Johnson and colleague Michael Gerrard are representing businesses and one resident who want to remain at Willets Point. The city wants to move them out, if necessary by buying the land through eminent domain, to make way for an elaborate development. The plaintiffs are suing separately in federal court, demanding services that the city has denied them for decades.

The lawyers will tell state Supreme Court Justice Joan Madden that the project requires two new ramps to the Van Wyck, triggering the need for Federal Highway Administration approval, which is far from certain. They’ll also argue that the impact statement should not have been prepared by Deputy Mayor Bob Lieber. The agency compiling the EIS must be the one that carries out, funds or approves the project. “The deputy mayor’s office wasn’t any of those things,” Johnson claims.

The city has agreed not to condemn any land until it receives the rest of its approvals, including from the state Department of Transportation. But “just the threat of condemnation is enough to drive away customers,” Johnson says. “It has a chilling effect on the ability of these people to do business.”
Posted by Willets Point United at 11:16 PM

Our oral argument has been rescheduled for Friday 8/21 at 11am at New York Supreme Court. We'll provide an update after the hearing.
Posted by Willets Point United at 11:34 AM 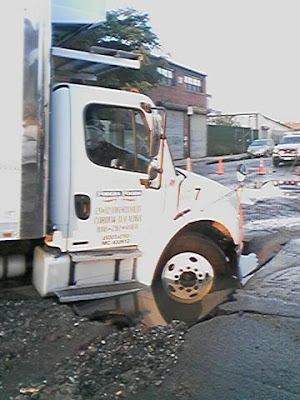 This is the scene at ~6am this morning. A Fodera Foods truck is stuck at the intersection of 34th Ave and 127th Place. The ground underneath the front tires caved in. More evidence of neglect by the City DOT. 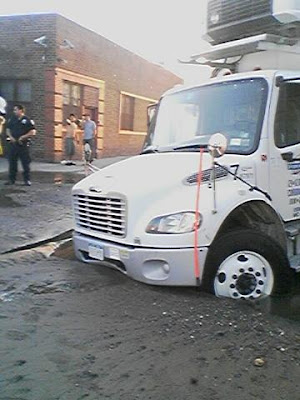 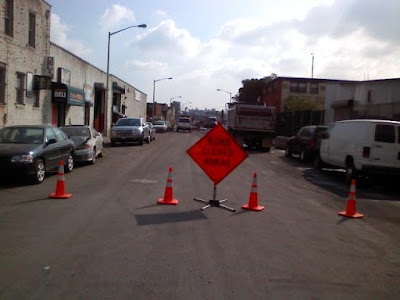 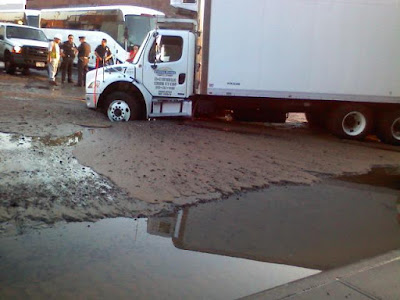 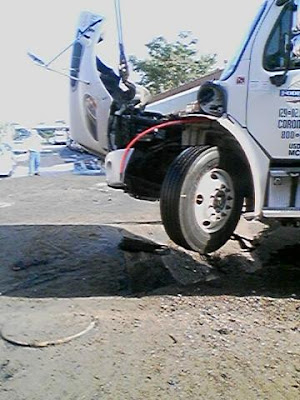 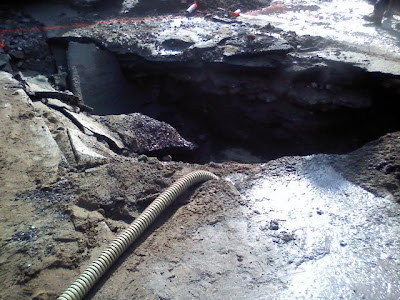 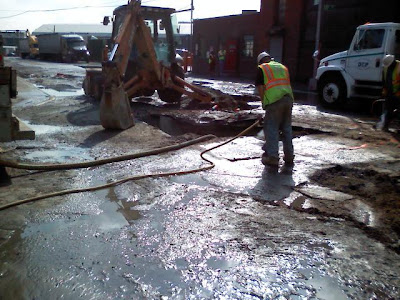 Posted by Willets Point United at 7:14 AM

Members of the East Harlem Alliance of Responsible Merchants “EHARM” continued their fight last week against the City's planned use and abuse of eminent domain in connection with the East 125th Street Project in East Harlem. EHARM sued the City in State Supreme Court in Manhattan in December 2008 to halt the project and the proposed taking. The City responded to the suit in March.

EHARM served its reply last week after discovering explosive information suggesting that the entire approval process was tainted by a conflict of interest involving the former President of the NYC Economic Development Corporation (EDC). The Developer chosen in secret but not revealed until minutes after the final approvals were secured was East Harlem M/E/C LLC, which consists of Archstone-Smith (which was funded by Lehman Brothers), General Growth Properties (which filed for bankruptcy in April, 2009 and now has pulled out of the project) and the Richman Group.

Documents recently obtained by EHARM now confirm that Archstone-Smith, General Growth, and the Richman Group made payments in 2007 and 2008 to the Carey Group, LLC totaling $297,669.40 for “lobbying,” Further, the "targets" for these payments are confirmed in filed documents to include the EDC with the purpose of the payment confirmed to be "procurement." When the development team was finally publicly disclosed on October 7, 2008 (after the final approvals were granted by the City Council), Mayor Bloomberg 's press release reported the Carey Group, LLC, to be a "member" of the "development team," but the City has more recently back-pedaled from that assertion, now referring to the Carey Group as a "consultant" to the developer.

The Carey Group principal and namesake, Michael Carey, touts on the company website that he was Executive Vice President and General Counsel to the EDC from 1997-1999, the President of EDC from 1999-2002 and then served as a Special Advisor to Mayor Bloomberg himself before starting his new practice. In fact, during his tenure as the President of EDC, Michael Carey also openly asserts that he oversaw the “revitalization of East 125th Street.”

According to Fancy Cleaners' Damon Bae, “It now comes as no surprise that this particular development group was chosen. There can be no doubt that this was a highly suspect process."

According to Attorney David MacCartney, "EHARM has alleged from the start that the City and EDC have abused power and procedure on many levels. This new information confirms and vindicates our position. The City and EDC acted in secret to benefit private parties led by an 'insider' which received almost $300,000 from financially troubled developers to influence the process. Worst yet, the unseemly process resulted in City approvals missing any assurance that this secretly chosen developer would ever have to deliver any of the promised public benefits used to justify the project."

A copy of the reply papers is online at http://www.eastharlempreservation.org/docs/E125Street.htm.
Posted by Willets Point United at 10:54 AM 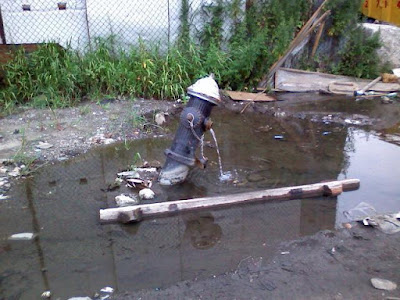 This fire hydrant at 35th Avenue & 127th Street has been running water for almost 3 weeks now.

The latest complaint was called in 8/7/2009 at 1:59 AM. These issues are supposed to be resolved within hours because it means water pressure in the vicinity has dropped and the fire department will have difficulty should there be a fire. This is putting people's lives in danger.

DEP where are you?
Posted by Willets Point United at 10:30 AM

Hearing on our EIS challenge scheduled for August 20th

From the Neighborhood Retail Alliance:

As the Crain's Insider is reporting this morning, the folks at Willets Point United will be getting their first court opportunity on August 20th to contest the city's effort to remove them from their land:

"On Aug. 20, Willets Point eminent domain opponents will get their first chance to make their case in a courtroom. Their lawsuit argues that because the Bloomberg administration’s proposed redevelopment requires a new Van Wyck Expressway off-ramp that has not been approved, it’s premature to condemn property. State and federal approvals are needed for the ramp."

...it makes little sense to evict land owners before there's any real indication that: (1) There is an actual plan with a developer and the money to complete it; (2) Even prior to the plan, that the city knows just how much it will cost to clean up the site-and the money is there to do it; and, (3) That the plan will be environmentally feasible-and not lead to an ummitigatable traffic nightmare in Congestion Free NYC.

Without these pieces in place, there's a good chance that the eviction of the property owners will yield a good sized, and more or less permanent hole in the ground; and in fact, two of the current Willets Point owners facing eviction, went through the same thing in College Point thirty years ago-and the land taken from them lies empty to this day!
Posted by Willets Point United at 1:00 PM

The Real Deal examines the Cornerstone Group and finds there isn't much information available out there about them, they aren't very helpful to the businesses and people they are attempting to relocate and they don't always do everything legally. An excerpt:

While Cornerstone has been in the business for decades, it does not maintain a Web site. Sources who have worked with the firm say its principals, Gary Curry and Stuart Polinsky, are publicity shy.

In one of the few published interviews that Gary Curry has given, he told the Willets Point blog Iron Triangle Tracker in November that "this is a job that a lot of people don't like to do, but we do it and we like to do it."

He also described some of the work Cornerstone would do for Willets Point businesses: "We'll go back in and start finding out the square footages of the businesses … We'll see what they have there and what they want to do, where they want to go. If they want to relocate together we'll try to put them together."

Some Willets Point business owners say, however, that while they've had contact with Cornerstone, they are not sure what the firm does.

"All I know is that they walked around and gave business cards around. They gave one to one of my workers," says Jake Bono, the third-generation owner of Bono Sawdust and Supply Co. and spokesperson for Willets Point United Against Eminent Domain, a group representing property owners and tenants that do not want to leave Willets Point to make way for the EDC's redevelopment plans.

Bono continues: "The city hires these companies to accumulate a paper trail. They're not doing anything to help anyone."

He argues, "They let the city say in court, ‘On such-and-such date Cornerstone went to the site and gave out 50 business cards.'"
Posted by Willets Point United at 10:30 AM