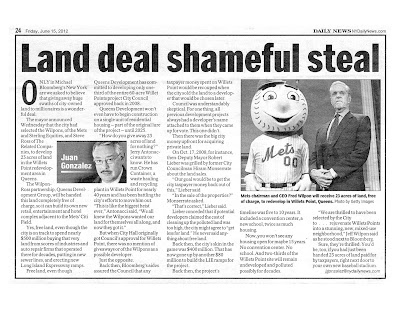 Vindication by the State's Highest Court

Willets Point United is pleased that by its decision in favor of plaintiffs, the Court of Appeals has recognized what we have known all along – the plan devised by Sterling Equities, Related Companies and the Bloomberg administration to construct a “Willets West” mega-mall on public parkland is illegal. They, plus the City Planning Commission, have always parroted that the proposed mega-mall on parkland is “authorized by statute,” which today’s court decision confirms is utterly false.

The contract between Queens Development Group (the joint venture of Sterling Equities and Related Companies) and the New York City Economic Development Corporation (NYCEDC) specifically provides that “if there is a final determination in a Legal Proceeding which would prevent the Project from being developed,” NYCEDC may exercise a “call option” to take back the two acres of Willets Point Phase One property already given to QDG for $1 under the Bloomberg administration. Willets Point United urges Mayor de Blasio to immediately exercise this contractual call option, to ensure that QDG has no undeserved foothold in Willets Point property, and to ensure a completely clean slate regarding decision-making about Willets Point Phase One property – without the City beholden in any way to QDG.

With QDG, Sterling Equities and Related Companies out of the picture, is Governor Cuomo now on deck to attempt to acquire Willets Point property to expand his LaGuardia Airport project? Airport expansion was never discussed when the City Council approved Willets Point development in 2008 – and it seems as though the affordable housing that was highly touted at that time as the linchpin of any Willets Point development is no longer decision-makers’ priority.

De Blasio Admin. and AG Fight for Mega-Mall on Parkland

In 2015, when Queens Development Group (QDG) announced its intention to appeal to the NYS Court of Appeals from the unanimous decision of the Appellate Division declaring that QDG cannot construct a “Willets West” mega-mall on Flushing Meadows Corona Park property without obtaining state legislative approval, Mayor de Blasio declined to join QDG’s appeal. De Blasio reportedly said that the City dropped out of the legal battle because QDG’s plan does not focus on affordable housing, and that “We think we can do much better on that [Willets Point] site going forward.”

But de Blasio has done an about-face: At tomorrow’s oral argument at the NYS Court of Appeals, the City will be fighting tooth and nail in support of QDG’s plan to construct a 1.4 million foot commercial entertainment and retail center on the parkland property located west of Citi Field stadium, right at the doorstep of the Corona neighborhood. The City has submitted a full written legal brief supporting QDG, and will be sending attorney Michael Pastor to present arguments in open court in favor of the mega-mall on parkland.

This is the same mega-mall that Queens Community Board 3 opposed in 2013, declaring that it “would change the character of the surrounding neighborhoods and impact the livelihoods of 250,000 residents and many small mom-and-pop businesses."

The de Blasio administration’s support for QDG’s mega-mall on public parkland has barely been reported by the press.

Last Tuesday, former City Councilman Hiram Monserrate held a news conference on the steps of City Hall to highlight what he called the “tale of two de Blasio’s.” Monserrate called upon de Blasio to withdraw – again – from supporting QDG’s legal battle for the mega-mall on parkland.
QDG is a 50/50 joint venture of Sterling Equities, whose owners also own the New York Mets baseball team, and Related Companies, a developer.

For its part, the Office of New York State Attorney General Eric Schneiderman will also be arguing in court tomorrow in support of QDG’s mega-mall on parkland. What could motivate the AG’s Office to swoop in and support QDG in court? Interestingly, between 2014 (the year that the legal challenge of QDG’s mega-mall began) and 2016, Sterling Equities Associates, LLC and Sterling Mets, LP have contributed $70,000.00 to AG Schneiderman’s 2014 and 2018 election campaigns.

The oral argument will take place on Tuesday, April 25, 2017 in a session beginning at 12:00 noon, in the courthouse located at 111 Dr. Martin Luther King Jr. Boulevard, White Plains, New York. The case is Avella v. City of New York.
Posted by Willets Point United at 11:14 AM