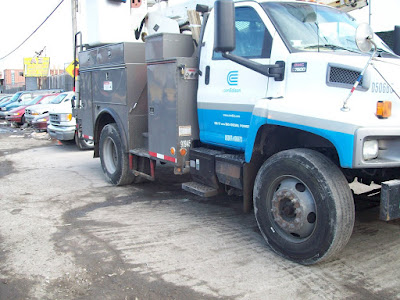 Con Ed has been down in Willets Point for a week now. 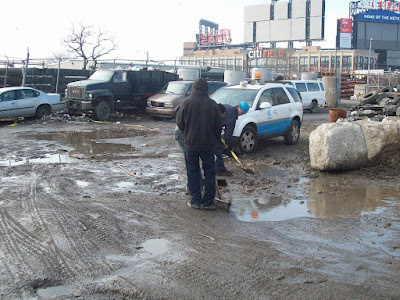 They can't get anything done. 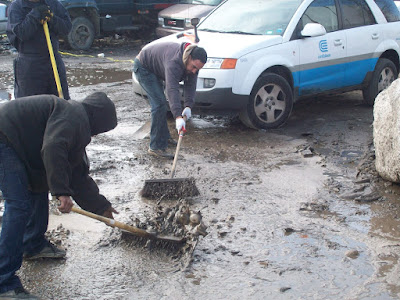 Because they can't find the manhole covers. 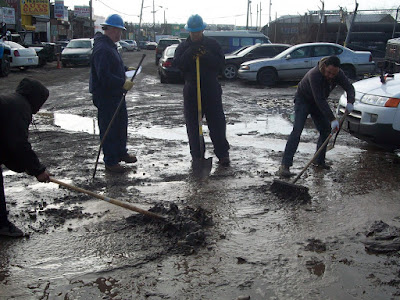 Because the streets are so bad.

When we spoke to the workers - well, let's put it this way - they are not happy.
Posted by Willets Point United at 5:40 PM 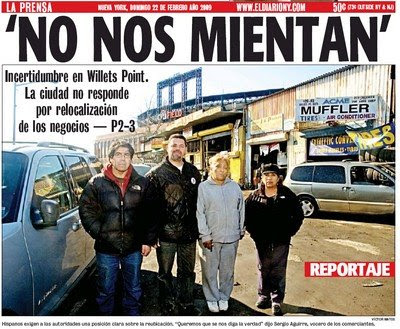 The following is a link to the El Diario Feb. 22 front page story about Willets Point tenant businesses demanding answers about relocation, and an English translation of the article's text that was obtained from an online translation engine.

Cover: 'NO NOS MIENTAN' ('DO NOT LIE TO US')
Uncertainty in Willets Point. The city is not taking responsibility for relocating businesses.

Living in constant uncertainty. The 1700 Hispanic workers in the mechanic shops of Willets Point have become accustomed to it, and they fear losing their jobs because of the City's pricey urbanization plan for the area, nearby where CitiField, the new stadium of the New York Mets, is nearly finished.

The mechanics' hopes are now focused on two areas where they expect to relocate their businesses: Rikers Island or College Point, in Queens, each one offering a minimum of 60 acres. Both possibilities were discussed two months ago with the New York City Economic Development Corporation, but since then nothing has happened.

The city has remained silent, and the workers are demanding answers.

"Willets Point is an economic engine. That's why we're calling on them to tell us what's happening with the relocation," said Sergio Aguirre, a spokesman for the Willets Point Defense Committee, which is comprised of some 75 mechanical workshops. "We want them to tell us the truth. Don't lie to us."

Julia Sandoval, from Peru, who is responsible for accounting at WJ Auto Repair and who has worked at Willets Point for more than 15 years, fears for the future of the mechanics at the 250 shops.

"I worry that all of these workers will be on the street," she said. "There are almost 2,000 of them, and the city's workshops aren't going to hire everyone if Willets Point disappears."

Moving to another area is a good option, say the workers, who are eager to keep their businesses open, even if in another place. However, they assert that each workshop will lose between 30,000 and 40,000 dollars if they close now.

"And it's all for the big business interests of the City. So that investors can get in here and make millions of dollars at our expense," said Marcos Neira, president of the Committee.

Neira estimates that between 300,000 and 500,000 cars come to Willets Point every year to be repaired. The economic crisis has caused a sharp drop in the sale of cars and an increase in the repairs of many vehicles. Willets Point has not benefited from this, however, because the City has not maintained the sewer drainage system, provided municipal services, or kept the streets of the area in decent condition, he said.

David Lombino, a spokesman for NYCEDC, said that the City is doing everything possible to help workers in Willets Point, but he cannot discuss the possible new locations for the businesses.

"Until we buy the land we cannot move anyone," said Lombino. The spokesman also said that the move "is not imminent," but refused to specify a precise period of time.

The construction of a hotel, convention center, apartments and offices in the area is to begin in 2010. Right beside the so-called Iron Triangle stands the new stadium, Citi Field, which will include a complex of shops and restaurants, bringing the total project cost to over $600 million dollars.

Lombino added: "We are making an unprecedented effort to assist owners of businesses with the relocation, so they can keep their shops, and the employees who choose to follow them to a new location."

NYCEDC has offered the workers a program of classes at LaGuardia College, to obtain a diploma and also the opportunity to learn English. The idea, however, does not appeal to many.

Harvey Epstein, attorney at the Urban Justice Center, described the courses as "unrealistic," since many Hispanics in Willets Point are undocumented, which will make it difficult for them to later find employment. The city has allocated $2.5 million dollars for the relocation of the businesses, he said.

Many see little good in a project that, according to the City, in 30 years would generate an economic benefit of $250 million dollars.
Posted by Willets Point United at 4:36 AM

A rare event - DOT makes a visit to the Point! In response to the firetruck getting stuck on Willets Point Boulevard on February 7th, DOT sent out an emergency repair crew on Wednesday, February 11th. The road was paved in a patchwork fashion along most of Willets Point Boulevard, but the stretch by the "Big Three" was paved contiguously. However, all along the street, only a strip down the center of the road was paved. The parking lanes were not touched.

And as for the side streets? Forget about it. 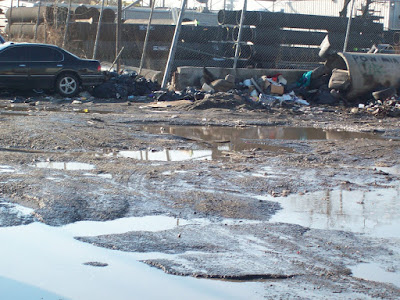 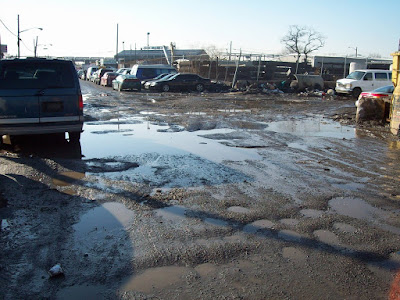 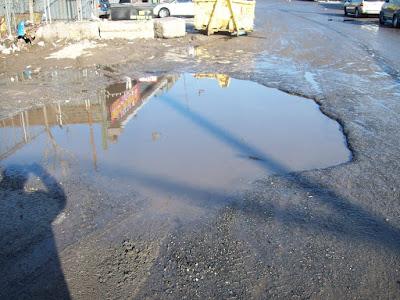 This is the first time that any area of Willets Point has been paved in at least a decade. The City's refusal to perform routine road maintenance puts the lives of workers and visitors to the area at risk. Withholding services from most businesses while providing it for a select few is also not acceptable.

By the way, DOT's maintenance facility is at Willets Point on the other side of Northern Boulevard...
Posted by Willets Point United at 11:16 PM 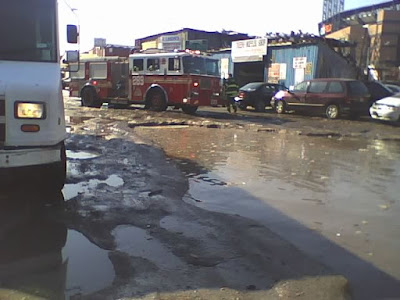 "An alert Willets Point business owner snapped a shot that speaks to the road conditions in the area. A firetruck from Engine 289 in Corona was unfortunate enough to get stuck in one of Willets Point’s many gaping potholes near 38th Avenue and Willets Point Blvd. following last week’s snowstorm."

This comes as no surprise. The City of New York has been neglecting the roads at Willets Point for decades. Here are some photos that show the blight they have caused. 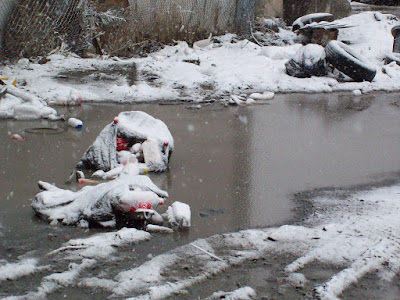 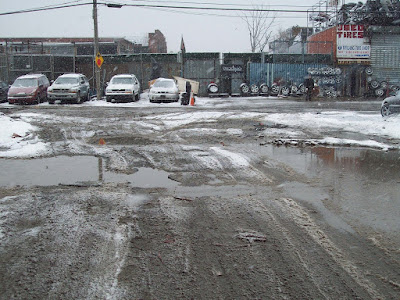 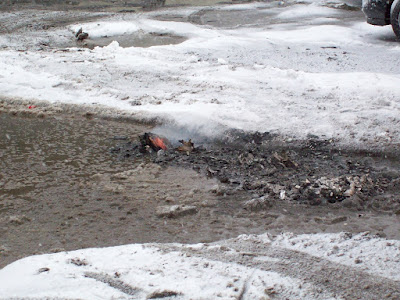 These streets are not navigable, and not only is the safety of workers and visitors to the Point put at risk, but so is the rest of Queens when first responders are delayed because of City negligence.
Posted by Willets Point United at 4:24 PM

Willets Point United Against Eminent Domain Abuse is a coalition of Willets Point business and land owners opposed to the taking of private property for private gain. WP United believes that during this current fiscal crisis, the $400 million set aside by the City of New York for land acquisition at Willets Point could be put toward better use.

During his most recent budget announcement, Mayor Bloomberg stated that the City would take Draconian measures to drastically reduce vital services. Here is a partial list of proposed cuts:

This list alone amounts to $228 million and these cuts are unnecessary.

Jerry Antonacci, President of Willets Point United Against Eminent Domain Abuse, stated, “The taxpayer money set aside for property acquisition at Willets Point could easily be redirected toward these agencies to prevent these cuts. There would also be enough left over to install a sanitary sewer system and fix the roads at the Iron Triangle and allow the property owners to stay, expand their businesses and allow the area to redevelop naturally.”

Jake Bono, business owner and member of the Willets Point group, agreed. “Why is there $400 million set aside to force business and property owners off their land while jobs for police, fire and teachers are being eliminated? Why in an economic downturn is the city spending money not only to destroy businesses and jobs, but to destroy the American dream of owning property? Government-abetted private land grabs were not what our founding fathers envisioned when they wrote The Constitution.”

On November 13, 2008, the City Council approved a plan that would remove existing businesses from Willets Point and redevelop the 64-acre industrial site into a convention center, hotels, shops and housing to be built and owned by a private developer. The City has announced that it will use eminent domain to achieve possession, if necessary, and then turn the property over to the developer, who is yet to be chosen. Willets Point United Against Eminent Domain Abuse represents more than two dozen property owners who are fighting the City’s plan to acquire their property.
Posted by Willets Point United at 9:36 AM