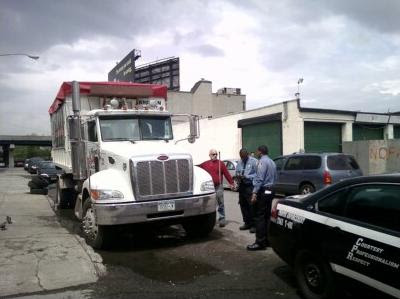 On Thursday afternoon, a City ticket officer issued a $115 ticket for a legally parked truck on 127th Place near 34th Avenue belonging to Bono Sawdust Supply. Pictured is company co-owner Jack Bono questioning the officer as to why a ticket is being written. The reply he received was, "Because I don't like your boss." When the argument persisted, the officer ended it by saying, "It's up to you to prove that this is a bogus ticket."

This is the same ticket officer who threatened to have the police confiscate a Willets Point business owner's cell phone after it was used to take a photo which was featured in this post.

"First, the City threatens to take my land, now I have to fight their B.S. tickets because their ticket officer doesn't like me," said Jake Bono, spokesperson for WP United.

"Next time, I'll have a video camera," Jake said.
Posted by Willets Point United at 9:18 AM