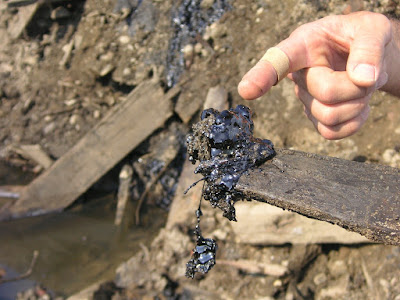 Oil has been found at the Flushing Airport site, the EDC has no intention of cleaning it up properly and the chair of CB7 says it doesn't bode well for the massive Willets Point cleanup:

CB 7 Vice Chairman Chuck Apelian...said he is equally skeptical of the city’s response and criticized the EDC for not briefing the board on what had been found during the course of work on Linden Place.

“I just want this stuff removed and I want it removed right,” Apelian said. “If this is the litmus test of the agency’s integrity, then what are they going to do when they go to clean up Willets Point?”

Photo and excerpt from the Times Ledger.
Posted by Willets Point United at 10:29 PM