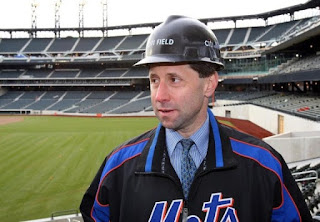 Jeff Wilpon, the Mets' chief operating officer, said Tuesday he has talked with Islanders owner Charles Wang about building an arena in Queens as a possible home for the hockey team.

Wilpon told Newsday in an exclusive interview that he has had recent discussions with Wang about relocating the team to a new Queens arena and also said that it remains a possibility that he could buy the team.

"I've had conversations with Charles," Wilpon said by phone Tuesday, "and we've talked about Queens. We'd like to be helpful and I think Queens is an option. We built Citi Field well under budget and on time. I have all my guys ready.

"We haven't really discussed ownership. It has been more of, 'Can we get something synergistic with Citi Field and a hockey arena, what can happen here?' "

Although the majority of their conversations have focused on building a new arena, Wilpon has not ruled out the possibility of owning the Islanders.

Wang has lost an average of $23 million a year since buying the team 10 years ago and is impatient with the pace of the proposed Lighthouse Project.

With the Town of Hempstead attempting to downsize Lighthouse development plans and Wang frustrated by the additional time and money it would cost to scale it back, the two sides have failed to come to an agreement. Still, Nassau officials say they would like the team to remain in the county.

A modified development plan is expected to be presented at some point this summer, Hempstead Town officials said.

In addition to the potential landing spots for the Islanders, there has been speculation that Wang, who did not return calls seeking comment, might turn to the National Hockey League for assistance and ask the league to take a controlling interest in the team.

The Wilpon-Wang connection, however, sheds new light on the team's situation.

Wilpon said he has been in touch with Major League Soccer commissioner Don Garber about bringing a soccer facility to the area as well, although the likelihood of building both a hockey and soccer venue looks slim.

"We probably can't do both," Wilpon said. "We just need to look at what could be done, as diverse as it is."

"We've had numerous discussions with Charles [Wang] and with Don Garber about soccer as well. We've been in touch, talking to Charles about what can be done synergistically with all of his technological [assets]. He likes the market here and they have all been positive conversations with him."

While the dialogue between Wilpon and Wang is an encouraging sign to Islanders fans who would like to see the team stay in New York rather than relocating to Kansas City or a Canadian locale, nothing is imminent.

"We are certainly willing and able and happy to work with Mr. Wilpon, but we have not heard any concrete plan as of today of bringing the Islanders into Queens," Queens Borough President Helen Marshall said. "It has to be real."

Wilpon said in the interview he, Wang and Garber are talking.

"It wouldn't be fair to say we have made any verbal agreements or even a handshake agreement, but we're definitely in the exploratory phase with both of them," Wilpon said.

Randi Marshall contributed to this story
Posted by Willets Point United at 2:20 PM