"A land grab by the elite" 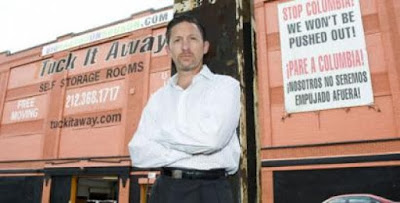 Next Tuesday, New York's highest court will hear the state's appeal of the decision last December preventing the use of eminent domain in order to forcibly take my family's property and give it to Columbia University, an elite private institution.

Columbia covets my property so it can add it to the rest of 17 acres in the Manhattanville area of West Harlem where it has decided to build a brand new campus.

A lot rides on how the court decides the case. In a little noticed section of the decision, Judge James Catterson ruled against the state's use of eminent domain on the grounds that Columbia's expansion is not a "civic project." The judge agreed with us that a private university doesn't constitute facilities for a "civic project."

A designation that a development is a "civic project" allows the state to "take" people's homes and businesses and add their land to certain specific types of projects. In the past, the courts have routinely held that "civic projects" should include significant public use of the facilities. Examples include a public park, a convention center, even a professional sports arena -- and, of course, a public school.

Never, however, has a court allowed eminent domain to be used purely for the benefit of a private school, college or university. And New York statutes nowhere make any specific reference to allowing this use of state power exclusively for an expansion of a private school.

As the judge noted, "Columbia is virtually the sole beneficiary of the project. This alone is reason to invalidate the condemnation especially where, as here, the public benefit is incrementally incidental to the private benefits of the project."

In short, as a matter of New York law, there is simply no precedent for designating a private university's project a "civic project."

If the Court of Appeals overturns this ruling, it could very well open the floodgates, for the first time ever, of excessive and aggressive expansions by any wealthy, well-connected private school. You could find yourself losing your home or business, wholly against your will, merely because the private school next door wants to build a larger gym or a new cafeteria. This is wrong.

Nick Sprayregen is the president of Tuck- It-Away Self Storage.

WPU will be sending representatives to the rallies and press conferences planned for June 1st in Albany.
Posted by Willets Point United at 3:44 PM