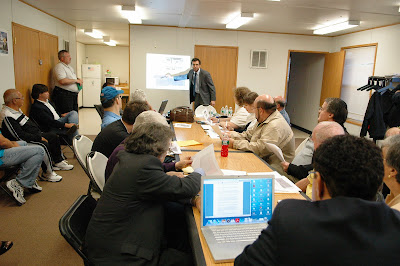 The 3 businesses represented at the night's meeting and which will be the subject of Monday's Borough Board votes are Feinstein Ironworks, Sambucci Bros. Auto Salvage and T. Mina Supply.

Apparently, the proprietor of Flushing Towing did not believe NYCEDC's lie that the meeting had been canceled, and he decided to show up at the trailer. Half an hour prior to the start of the meeting, he was seen conversing at length with NYCEDC lackeys outside of the trailer. Eventually, he left prior to the meeting without entering the trailer. During the meeting, no one present even bothered to ask what had happened to the other 2 businesses of the total 5 whose relocations to the College Point Corporate Park had been approved last year.

The 3 businesses provided "Cooperation Letters" to CB7, containing representations such as: Acknowledging the adequacy of the space available at the College Point site; business will not park any vehicles or trucks on any of the adjacent or adjoining streets or business lots; main access to the site will be on College Point Boulevard, and main egress exiting the site will be on 31st Avenue.

Committee Chair Chuck Apelian stated: "My sole desire is to have these 3 businesses come into College Point, as owners; and become model citizens of the College Point Corporate Park. And the biggest intent we have, is that we never hear of any problems or any issues from them at all. ... And that's the purpose of the memorialization of these letters."

However, CB7 Chair Gene Kelty wondered what recourse there would be if the terms of the letters are violated in the future. Kelty asked, "Those letters that we now have -- If they don't abide by them, what enforcement action is there and what agency is going to enforce it?" When told by NYCEDC that NYPD would be responsible for enforcement, that did not sit well with Kelty. "See, now we have a problem. ... You're not going to dump that on the PD because they're not going to enforce it. They haven't enforced anything in 25 years that I've been here."

Kelty insisted that instead, NYCEDC's legal department should commit in writing to "sue" any of the 3 relocated businesses that fails to comply with any provision of their Cooperation Letter, to force their compliance. Kelty concluded: "Unless EDC gives me a commitment, in a letter in writing, by next week, saying that their legal department will take legal action to back these letters up, this is as useless as Mayor Bloomberg's promises."

NYCEDC diplomatically pointed out that NYCEDC may not be legally entitled to compel relocated businesses – by suing them – to comply with provisions of the Cooperation Letters. And the business owners appeared insulted, that Kelty is envisioning future circumstances in which NYCEDC must sue the businesses.

After further discussion, Kelty ultimately requested that NYCEDC provide a letter signed by NYCEDC President Seth Pinsky, assuring CB7 that NYCEDC will be responsible for contacting enforcement agencies in the event that relocated businesses do not abide by the terms of the Cooperation Letters that they have signed.

The Queens Borough Board reportedly is scheduled to vote on this matter during its meeting on Monday at 5:30P.M. If the Borough Board approves, the 3 businesses still will not take title to the College Point properties until their closing dates with NYCEDC, which have not yet been scheduled and are not expected to occur until several months from now.

Meanwhile, why the relocation of 2 other approved businesses is not proceeding is unknown. And above all, there is no plan whatsoever to relocate the overwhelming majority of 250 additional Willets Point businesses.
Posted by Willets Point United at 6:42 PM