Don't let the door hit you on the way out... 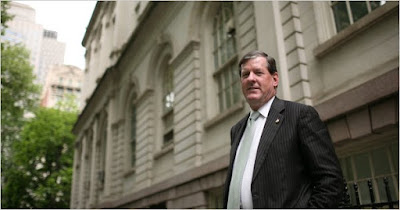 Robert C. Lieber, the former Wall Street executive who has guided the Bloomberg administration’s economic development efforts during the recession, told his staff on Wednesday that he would step down as deputy mayor in June.

Mr. Lieber, 55, who has been in the job since January 2008, has focused on projects including the redevelopment of Coney Island, the city’s takeover of Governors Island and the rezoning of Willets Point in Queens. He also has pushed the city’s economic development strategy beyond big real estate deals to include smaller entrepreneurial initiatives and a number of growing industries.

Richard Lipsky, a lobbyist for small businesses who opposed the city’s plan to redevelop Willets Point and to use eminent domain to gain control of the land, said that Mr. Lieber’s approach failed to account for the collateral damage to the neighborhood.

“The deputy mayor and his agency have proceeded in a recession to promote a project that is going to cost hundreds of millions of dollars and displace scores of small businesses and thousands of workers without any conceivable plan or a developer to implement it,” Mr. Lipsky said.

Mayors and politicians have come and gone over the decades, but we are still here. And we plan on being here for many more decades to come.
Posted by Willets Point United at 12:18 AM