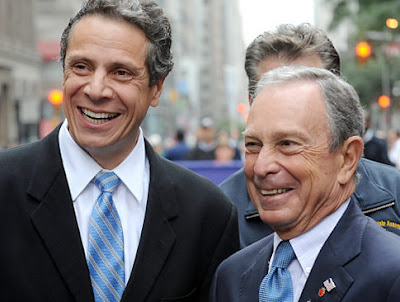 Reporting on the mixed record of Attorney General Andrew Cuomo, the NY Times writes the following:

...an investigation into whether the administration of Mayor Michael R. Bloomberg and some public officials violated lobbying laws in their redevelopment efforts is still unresolved after two years. (Mr. Bloomberg last month endorsed Mr. Cuomo’s campaign for governor.)

They are referring to our request for an investigation into Claire Shulman's illegal lobbying efforts as well as a request submitted by Atlantic Yards reporter Norman Oder.

Photo from the Daily News
Posted by Willets Point United at 2:14 PM