EDC doesn't think they have to abide by the same rules 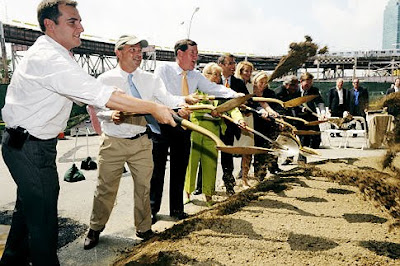 The Daily News has an interesting article about the agency looking to take our properties:

Top officials at the city agency that doles out tax breaks to businesses have spent thousands of public dollars on perks - from booze and fancy chairs to gold-plated shovels.

An examination of Economic Development Corp. honchos' credit cards from July 2008 through March unearthed a stunning collection of unusual purchases on the taxpayer's dime. The bills generally have risen month by month during the past two fiscal years, growing from $5,870 in July 2008 to $18,226 in March. In December, they topped $20,000.

* To fly participants in a "Next Idea" contest from India and Argentina and put them up for a week in the Manhattan Holiday Inn in January. The tab: $13,861. Winners and others that month got gold-engraved plaques valued at $370.

* For interoffice wining and dining.

Most city agencies follow rules that say payment for "modest meals and light refreshments" should be regarded as "an exceptional event." But officials at the EDC, a quasi-city agency that also collects rent on city properties, say they aren't subject to the same rules.
Posted by Willets Point United at 7:24 PM