Members of Willets Point United Inc. ("WPU") recently accepted the invitation of the Property Rights Foundation of America ("PRFA") to address its annual conference, held this year in Lake George, New York. The day-long event drew attendees and guest speakers from prestigious organizations across the United States, many of whom are now allied with WPU as it actively opposes the City of New York's inappropriate plan to forcibly acquire Willets Point properties in order to deliver them to a private developer.

WPU members Irene Prestigiacomo and Joseph Ardizzone presented jointly to the conference. "What you just need to know," said Prestigiacomo, "is what we're trying to do to stop the abuses – the egregious abuse – of eminent domain in New York State." 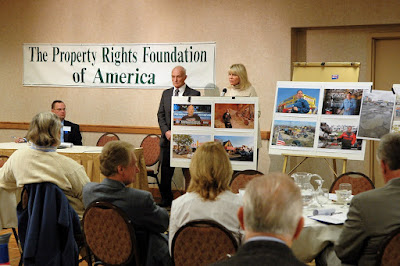 Speaking extemporaneously, Prestigiacomo recalled how she was approached by Jake Bono, a fellow Willets Point property owner, for the purpose of forming WPU to oppose the City's attempted land grab after decades of neglect: "Mr. Bono and the 20 other property owners decided we're not going to let them do this; we decided to keep fighting ... We are fighting. We've hired a lot of people to help us. But we're finding out that it doesn't just matter to be right; it doesn't matter to have all the facts on your side."

Prestigiacomo described the City of New York's long-standing mistreatment of the Willets Point property owners, who have paid their property taxes for many decades but have received virtually no City services or infrastructure in return, resulting in dilapidated conditions in Willets Point today. As a prime example of the City's bad faith, Prestigiacomo highlighted the promises of former Queens Borough President Claire Shulman to G.L. Soni, the owner of House of Spices, a Willets Point business, regarding the installation of infrastructure – promises blatantly broken by Shulman as soon as she made them. Prestigiacomo also blasted New York State Attorney General and gubernatorial candidate Andrew Cuomo, who promises to "root out corruption", yet who has taken no enforcement action in connection with several complaints made by WPU alleging unlawful acts by City officials and others involved with the proposed Willets Point development. "You're dealing with corruption and collusion on the parts of the people that you elected to be the watchdogs to stop the corruption and the collusion," Prestigiacomo told the conference. "And I'm finding this out every time I turn around." 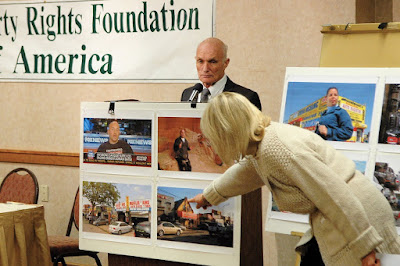 The sole resident of Willets Point, Joseph Ardizzone, prepares to address the conference as Irene Prestigiacomo identifies Ardizzone's house in a photograph.

Conference attendees were especially delighted that Joseph Ardizzone, the sole resident of Willets Point, traveled to Lake George to address the crowd. As Prestigiacomo identified Ardizzone's house in a photograph displayed to the audience, Ardizzone spoke about the impacts of the City's proposed development plan: "I was born and raised at Willets Point. I am now 78 years of age. And the government has decided to cast me aside. I live at Willets Point for one reason: I like living there. It may sound strange; I've seen a lot of changes in the area; a tremendous amount of growth. And that's called 'free enterprise!' If all the people in the United States lose free enterprise, free enterprise is going to fold. I think this is entirely wrong. We separated ourselves from England; God bless us." 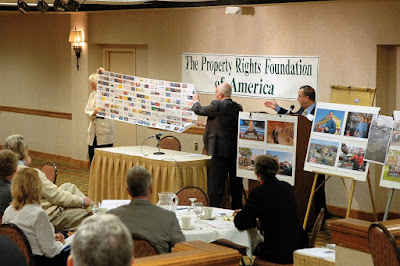 As the audience gasps, WPU unfurls a scroll that depicts the business cards of 250 Willets Point businesses that are jeopardized by the City's proposed development plan.

WPU was accompanied at the conference by filmmaker Robert LoScalzo, who is producing a comprehensive documentary program about Willets Point and the far-reaching consequences of the City's development plan. As a result of his documentary research, LoScalzo has amassed what is believed to be the most extensive private collection of Willets Point artifacts, documents and interviews, some of which he shared with conference participants. 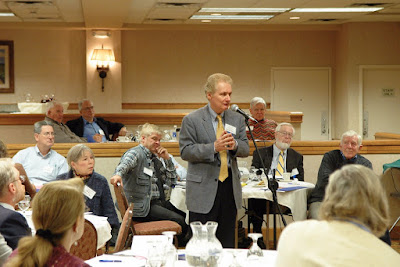 Roger Pilon, Ph.D., J.D., Vice President for Legal Studies, B. Kenneth Simon Chair in Constitutional Studies and Director of the Center for Constitutional Studies at Cato Institute, delivered the conference's opening address concerning the erosion of property rights by the elite class. Following WPU's presentation, he told the audience: "What you've got here is a textbook example of what's going on all across the country. All the people who are in [Willets Point], are in there because they saw an opportunity to make a living, to set up a business – A radiator business, a sawdust business, you name it. It's what the Austrian economist Friedrich von Hayek called 'spontaneous order'. Nobody planned this [Willets Point industrial district], right? Nobody sat up above them, and said "Now, this is where the radiator place goes; this is where the muffler place goes; this is where the transmission place goes. And the thing is, nobody could have planned that from above, as efficiently as the people from below have planned it. They are the ones who saw the opportunity. They are the ones who moved in there. Now, what you've got in contrast to that, is these elites, as I spoke of earlier, coming in and saying 'We know better than you folks know. You know, you really don't understand. You have false consciousness,' to put it in Marxist terms, right? 'You don't understand what's in your best interest. We do. And so we're going to take over this, for you.' You've got a human interest story here ... that really needs to be brought out to the public." 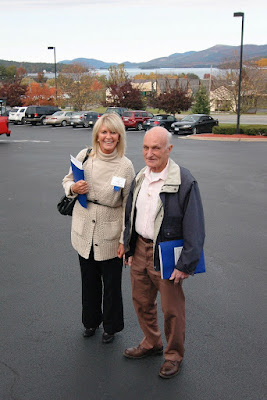 Irene Prestigiacomo and Joseph Ardizzone in Lake George, New York, attending the 2010 conference of the Property Rights Foundation of America.

All photographs by Peter J. LaGrasse.
Posted by Willets Point United at 10:12 PM