This morning, WPU members Jake Bono, Jerry Antonacci and Len Scarola and WPU's attorney Mike Rikon, attended a meeting with Senator Bill Perkins who is leading the charge against Eminent Domain abuse in New York State. He expressed his support for our group's cause. More importantly, he will eventually push for legislation that would overhaul eminent domain law in NY State. He is the only elected official that has put his/her name to the possibility of such a reform.

WPU will be attending Senator Perkins' town hall meeting regarding the Columbia University development project THIS SATURDAY MORNING from 9:30 am - 11:30am (see the attached flier for more details). He stated that this type of local meeting is the beginning phase of his plan that will influence a climate of change with respect to eminent domain law and is CRITICAL to the eventual passing of any legislation in support of property rights. He plans on holding a meeting for each major current eminent domain case; Columbia U, Atlantic Yards & possibly Willets Point. He even expressed interest in holding a meeting on Didden vs. The Town of Port Chester. The purpose is to expose all the corruption involved with these cases. (A Willets Point hearing would require several days.) 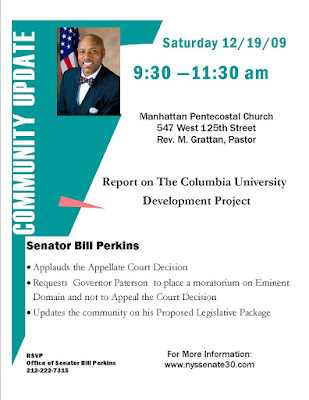