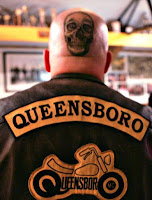 From the Times Ledger:

Based during the 1930s in a clubhouse on a piece of land that became the grounds of the World’s Fairs in Flushing Meadows Corona Park, the [Queensboro Motorcycle Club] left the site at the behest of the fair committee before the first World’s Fair in 1939. It eventually moved to the current site and is now facing relocation once again as the Bloomberg administration plans to redevelop the entire 62-acre Willets Point district for mixed uses.

Club leaders are in ongoing negotiations with city officials to sell or swap the property, which they have owned since moving there. QBMC President Bill Goldstein said the club would love to find a taker for the lot and well-appointed clubhouse.

“Seventeen years ago when I started in the club, it was a great spot. Now it’s a rat-infested, pothole-infested, gross area,” he said. “We’re probably one of the few businesses down there that would move if given the right opportunity. We have been speaking to the EDC, who’ve been very nice to us, but nothing seems to be going on at this time. We were looking for properties up until last year, in fact, and then the economy failed and everything kind of just stopped.”

So for now the Queens bikers will stick it out in their longtime home base in Willets Point, riding there in warm weather and cold to carry the Queensboro Motorcycle Club into its second century.

1) Notice how it was considered to be a "great spot" before another 2 decades of intentional city neglect turned it into a "rat-infested, pothole-infested, gross area". (No mention of the businesses causing the blight, as the EDC asserts.)
2) This refutes the EDC's other assertion that they are in current talks with all landowners. And this is coming from a group that wants to sell.
Posted by Willets Point United at 6:24 AM