Pinsky not telling the truth about negotiations 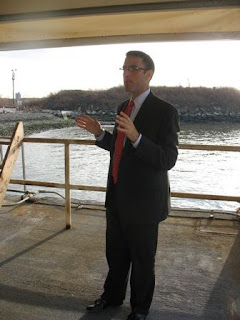 From the Queens Courier:

Last week, EDC announced it received 29 responses to its Request for Qualifications for developers or teams of developers interested in redeveloping the [Willets Point] site. Next, EDC will develop a short list to receive a future Request for Proposals (RFP) with a developer being selected sometime in 2010, according to Pinsky.

The city’s plans for the project call for redeveloping 18 acres of the southwest portion of the site, and it currently has secured about 75 percent of the land from property owners for the first phase of the development plan.

However, some Willets Point business owners said the city is not negotiating at all with them, and they were encouraged by a recent Court’s derailing of a Columbia University expansion project that sought to utilize eminent domain.

“We knew that eminent domain didn’t have that much life left in it,” said Jake Bono, the third generation owner of Bono Sawdust Supply Co., who is still fighting to keep his business at the site. “I don’t think they [the city] have a chance anymore to take my property."

Posted by Willets Point United at 10:17 AM