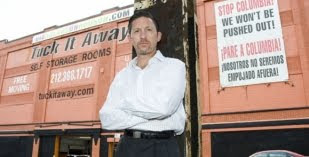 From the NY Observer:

The New York Court of Appeals on Tuesday unanimously ruled that the state's economic development agency, which administers eminent domain, must turn a set of records over that Mr. Sprayregen had requested through the Freedom of Information Law. The agency, the Empire State Development Corporation, had provided numerous documents but withheld a set related to a 2004 agreement between the agency and Columbia. Mr. Sprayregen appealed the agency's denial of his FOIL request, and was denied again. He then sued in state Supreme Court and won, though ESDC did not provide all the documents, preferring to appeal. He won again at the appellate level; ESDC appealed again; and now the agency has exhausted its appeals.

The ruling of the court Tuesday found that the agency was overly broad in denying Mr. Sprayregen's FOIL request, and then changed its reasoning for not providing the documents, with the court saying and its "initial determination was superficial, at best."

WPU has been FOILing documents, too, and has also been denied for no valid reason. A decision with respect to our requests will likely end up being decided by a court as well since EDC is being secretive and uncooperative with the public information they possess.
Posted by Willets Point United at 12:23 AM