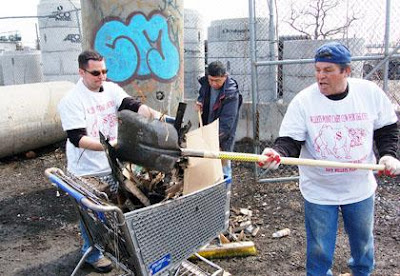 Excerpts from articles in this week's papers:

"In what business owners said was a rare appearance, the department has been visiting Willets Point in recent days. Street sweepers and garbage trucks canvassed the area for much of last week — which the agency said was nothing more than standard duty for the road crews working in Willets Point. Crown Container Co. owner Jerry Antonacci insisted the increased city presence was far more insidious, however.

“Ever since we passed out fliers saying we were going to do a cleanup, they’ve been out sweeping the streets,” Antonacci said. “They got wind of our cleanup day and figured they’d beat us to the punch. If they can come around and do what they’re doing now, that’s great. But they should be doing that every week.”

Antonacci, also president of Willets Point United, said despite the Sanitation Department presence, his trucks dumped two large loads of trash following the cleanup — one of 5.19 tons and another of 3.24 tons."

"Willets Point has no sidewalks or sewers. Potholes are ignored and fill up with rain in the spring and ice and snow in the winter. Many of the businesses are auto-related and used-car parts and damaged vehicles are strewn throughout the area.

The area is bounded on one side by 126th Street, where many of the auto shops are located, right across the street from the newly completed Citi Field.

The city’s redevelopment plans calls for housing, a school, office and retail stores, a small convention center and hotel. No developer has been selected yet.

“There is no plan,” Bono said, “but the city approved it anyway.”

Although the city has promised to help relocate businesses and plans to move several to College Point, Bono indicated no alternate sites have been suggested this year. And he and others are determined to stay.

“This is our property. We bought it,” he said, noting the city announced it will use eminent domain to gain possession if necessary."

"WPU’s presence has blossomed online since its January inception, and has received the backing of Councilman Tony Avella (D-Bayside), who questioned the need for the day’s events.

“Why? So Mike Bloomberg can turn around and give the land to one of his millionaire developer friends,” he said."

from Willets Point owners do tons of dirty work for city by Joseph Orovic of the Queens Tribune, 4/2/09
Posted by Willets Point United at 2:13 PM