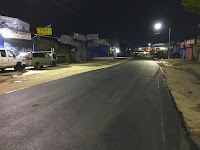 The affected roadway – which fronts scores of businesses, many of which are featured in our “Willets Point: Open For Business” video (2017) – had fallen into severe dilapidation due to the City’s deliberate neglect over several decades.

This wear-and-tear repaving comes 3 months after Willets Point United sent a formal petition to NYCDOT Queens Commissioner Nicole Garcia signed by 50 business and property owners, pleading again for repaving; more than 6 years after Queens Community Board 7 declared that “road wear and tear rehabilitation must be implemented now for the remaining [Willets Point] Phase 2 property owners,” as a condition of CB7’s 2013 approval of special permits sought by Queens Development Group to enable its scandalous proposed shopping mall on nearby public parkland; and decades after Willets Point business and property owners began to complain about the horrendous street conditions created and perpetuated here by successive City administrations.

Credit for the wear-and-tear repaving is due to former NYS Senator Tony Avella, who always demanded that the City provide road repair services at Willets Point, and hosted our “Willets Point: Open For Business” news conference in 2017; Irene Prestigiacomo, who walked door-to-door to collect petition signatures over several days; Sam Sambucci, who has pressed the need for street repair at CB7 committee meetings and annual budget hearings; CB7 Chair Eugene Kelty, Vice Chair Chuck Apelian and District Manager Marilyn McAndrews, who arranged and attended an on-site Willets Point visit with NYCDOT; and NYCDOT Queens Commissioner Nicole Garcia and Queens Borough Planner Andrew Arcese. We must also note the mysterious lack of help from City Council member Francisco Moya, NYS Senator Jessica Ramos, and Queens Borough President Melinda Katz – each of whom has rejected our requests to meet to discuss circumstances at Willets Point.

Although we are thankful that NYCDOT has provided wear-and-tear repaving of Willets Point Boulevard, we must note that it does not substitute for a long-lasting, comprehensive overhaul of our streets and sidewalks, which NYCDOT claims will be funded by $17 million in the City’s budget – work which we still expect NYCDOT to implement as soon as possible.

Moreover, as of this writing, NYCDOT has not repaved 127th Street between 34th Avenue and Willets Point Boulevard, surely one of the most notorious dilapidated roads in New York City.

And finally, any repaving by NYCDOT does nothing to re-open Willets Point streets which the New York City Economic Development Corporation has unnecessarily closed, and which we have requested be reopened. In particular, 37th Avenue provides a unique, direct connection between 126th Street and Willets Point Boulevard, and should be open.

Case in point: EMS recently required 15 minutes to respond to an emergency on Willets Point Boulevard – and actually remarked that they would have arrived significantly sooner, except for the many closed streets preventing access. (In 2008, the EMS response time to Willets Point was 6 minutes and 16 seconds – roughly 9 minutes less than the recent response that is complicated by multiple street closures.)

Any neighborhood has a right to rapid and timely EMS response, which is prevented now at Willets Point by NYCEDC’s needless closure of streets, particularly 37th Avenue. We hope that NYCEDC will follow NYCDOT’s lead and provide what we are requesting at Willets Point.