On May 23, 2019, Willets Point United sent its Petition – requesting that the Department of Transportation provide urgently-needed street repair and maintenance services in Willets Point – to DOT Queens Commissioner Nicole Garcia. The Petition, signed by fifty Willets Point businesses and property owners impacted by the severely deteriorated roadways, was accompanied by a cover letter from Willets Point United founding member Irene Prestigiacomo, who also requested a meeting with Commissioner Garcia. 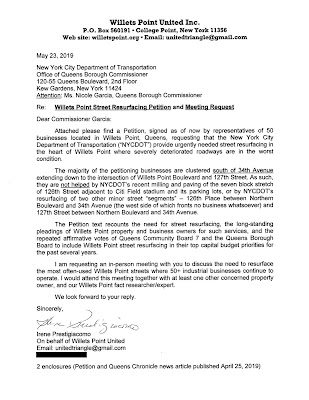 The Postal Service return receipt shows that the Petition and cover letter were delivered to DOT on May 24, 2019. 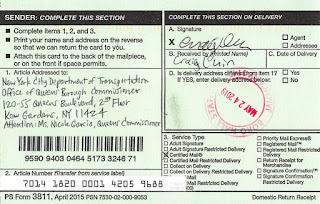 However, in the six weeks since receiving the Petition and cover letter, DOT Queens Commissioner Nicole Garcia has not responded to it.

Meanwhile, during that timeframe, DOT was able to replace all of its street signage along nearby 126th Street, to accommodate the New York Mets street renaming ceremony held on June 27 to honor former Mets player Tom Seaver. That ceremony followed DOT's complete repaving, earlier in May, of the seven block stretch of 126th Street that fronts Citi Field stadium.

DOT prioritized that ceremonial work for the Mets, while continuing to neglect severely cratered streets in the heart of Willets Point, that are the topic of the Petition.

Commissioner Garcia is supposedly a "public servant," whose first priority must be to "represent the interests of citizens".

We submit that she isn't doing so, when she gives no response to our Petition for urgently-needed street repair while accomplishing ceremonial work for the New York Mets.
Posted by Willets Point United at 2:06 PM