J-Rod, It Won’t Be a Cakewalk

So the Wilpons want out of their New York Mets baseball team ownership.

It’s been reported that potential Mets purchasers include former Yankees player Alex Rodriguez and entertainer Jennifer Lopez, who are also “researching how to develop the ballpark and the area around it,” which includes Willets Point.

Now also getting into the act is Las Vegas Sands Corp., which is contacting potential Mets purchasers to discuss “a new casino [Sands] wants to build near Citi Field,” according to its President and COO, Rob Goldstein. 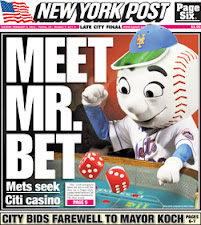 The Wilpons already tried to site a casino just west of Citi Field stadium, proposing it to the Bloomberg administration in 2011 in tandem with developing a third of Willets Point land, located east of Citi Field across 126th Street. Faced with opposition, in 2012 the Wilpons changed from proposing a casino outright, to instead proposing a vague “entertainment and retail center”. Whatever they called it, it would have been built on public parkland west of Citi Field – which is illegal, because the state legislature has not approved alienating that land for commercial use. Such were the 2015 and 2017 rulings of New York courts, which enjoined the project.
Las Vegas Sands Corp. acknowledges that they “cannot really do anything more until the Government approves gaming” on the site. But given the tremendous financial windfall that is at stake, we presume that interested developers will aggressively lobby state elected officials for the necessary approvals, or are doing so already.
Meanwhile, even though the Wilpons’ 2012 plans for one third of Willets Point land have fallen through, and even though they have not presented any new plan for that area that has been approved by the City in the three long years since the final Court of Appeals ruling enjoined their previous project, Mayor Bill de Blasio inexplicably continues to deem the Wilpons (with their partner, Related Companies) to be the exclusive Willets Point developers.

If the Mayor honestly wanted to jumpstart Willets Point development, he could have cut loose the Wilpons and Related Companies (doing business together as “Queens Development Group”) during the past three years, then solicited competitive, viable proposals from the worldwide development community. By not doing so, the Wilpons now are able to leverage their designation as a Willets Point developer, in negotiations with potential Mets buyers.

Are the Wilpons selling not just the Mets team, but some portion of their share in Queens Development Group? How is it in the City’s interest, to allow the Wilpons and Related Companies to determine whether a Mets buyer can get involved in Willets Point development, instead of that buyer creating its own plan and proposing it directly to the City? Do prospective buyers even understand the development circumstances around Citi Field and Willets Point?

Willets Point redevelopment was initiated in 2007 by then-Mayor Michael Bloomberg – an elitist land grab of private property, enforced by the threat of eminent domain, to be given to the “one percent” for them to exploit. The redevelopment would also eradicate hundreds of small businesses, many owned and operated by Latinos and other persons of color. Ironically, two Latinos are now apparently eager to propel that project.

We’re well aware of the “star power” of Alex Rodriguez and Jennifer Lopez. They probably expect nothing less than a very warm welcome in Queens, as new owners of the Mets and co-investors in some glitzy Willets Point development. But their celebrity will not shield them from responsibility for destroying the livelihoods of Latinos and other persons of color who depend on Willets Point for income, if their Willets Point development intrudes on existing businesses and private properties.

In case they haven’t noticed, the world climate has evolved in the 13 years since Bloomberg began the elitist land grab here. Economic genocide by an elite class will no longer be tolerated. Using eminent domain to take people’s private property in order to give it to the elite “one percent” for them to exploit, is quickly recognized as the outrage that it is. The people of Willets Point will continue to defend our businesses as well as our private property, bolstered by the world’s higher awareness and scrutiny of injustice.