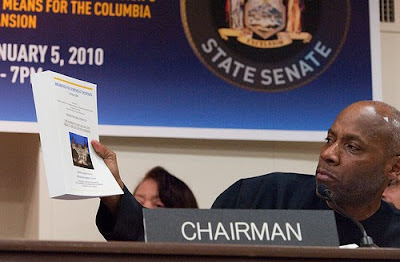 From the Architect's Newspaper:

...Now, a clutch of Albany pols are preparing to begin changing what some consider the worst eminent domain laws in the country.

Perkins and Alessi at an eminent domain hearing in Harlem earlier this month.
Tracy Collins

Leading the charge is state Senator Bill Perkins, whose district covers much of Harlem. “I think the forces are coming together for change to take place,” Perkins said. “There is, from my observation, growing interest on a grassroots level.” As chair of the Committee on Corporations, Authorities and Commissions, Perkins oversees the main executor of eminent domain in New York, the Empire State Development Corporation.

Among those joining Perkins is fellow senator James Alesi, a republican who represents the rural areas surrounding Rochester. “After many decades, it is time for an overhaul for what has become a double-edged sword of beneficial economic development but also deleterious theft,” said Alesi at a January 5 hearing held on eminent domain reform, the first of many planned in the coming months across the state.

As chair of the Committee on Corporations, Authorities and Commissions, Perkins has some oversight of the main executor of eminent domain in New York, the Empire State Development Corporation. The senator stressed that he has some ideas about how to address eminent domain, but he does not want to tip his hand this early and also hopes to gain insight and ideas from the public.

There were proposals aplenty, ranging from compensation reform to abolishing the ESDC. One of the most obvious suggestions was to essentially reverse *Kelo and outlaw the taking of private property for anything but use by the government. But given the power of real-estate interests in the state and the proclivity of certain politicians, *including Mayor Michael R. Bloomberg, toward development, such a provision is unlikely.

The simplest changes may affect eminent domain litigation. Numerous attorneys advocated for a more open legal process to allow landowners to challenge eminent domain proposals. In New York, all such cases forbid jury trials, a practice exercised by no other state. “You slip on the floor, you get a jury,” Michael Rikon said. “You have your property taken, you get nothing but a judge. Let the people decide what’s right and wrong.”

Gideon's Trumpet is not as optimistic, however:

"Our view of that thankless endeavor is that there will be eminent domain reform in New York when pigs learn to fly. That state has over a period of decades evolved such a kleptocratic legal culture that we have difficulty seeing what forces would take the lead in getting the legislature to make effective reforms. And as for New York judges, . . . Just read up on how judges are picked in New York. It’s all there in the archives of the New York Times.

So we offer our best wishes to the beleaguered New Yorkers trying to keep their property out of the clutches of local redevelopers, or at least to be fairly compensated when their property is taken. As that old, politically incorrect punchline from an old World War II joke went: Rots of ruck, guys."
Posted by Willets Point United at 7:46 AM