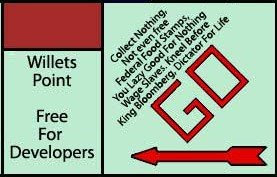 From an interview with Mayor Bloomberg by the Queens Chronicle -

Question: What is the status of the Willets Point redevelopment project and do you expect to use eminent domain there?

Answer: [Regarding eminent domain] No, people will move. It will take 10 years and a stronger economy to build it up, but we’re already working on the infrastructure. The zoning issues for Willets Point started for the 1964 World’s Fair, so it took 45 years to do. But at least now it will be built up.

Actually, sir, it will take 10 years just for the City to get the people who made deals to stay to vacate. And with the lawsuits that will be filed, you can add another 5 years onto that.