The tenants' court Petition describes a very disturbing reality that contrasts with the rosy visions that NYCEDC and City Council member Julissa Ferreras have sought to put over on the public. Like the rally held by a different tenant business group on November 20, 2013, this lawsuit should help to set the record straight concerning many unpleasant aspects of QDG's proposed Willets Point / Willets West development.
In their lawsuit, the Sunrise Cooperative tenants state that "there was no lawful relocation plan for current commercial tenants," that "the relocation assistance has been ineffective" and that the City's failure to implement a legitimate relocation plan, including viable relocation properties, is a violation of federal law – specifically, the Uniform Relocation Assistance and Real Property Acquisition Policies Act of 1970 (the URA).
The lawsuit notes that the New York Daily News reported on September 3, 2013 "that only ten out of the approximately 110 businesses in Willets Point, or only 9 percent, had been successfully relocated." Burnishing the point, the lawsuit continues: "Despite receiving testimony from the Urban Justice Center and others stating that the relocation plan was inadequate, the EDC and Developers have not provided meaningful assistance to the Petitioners."
Here, we remind our readers that NYCEDC hired Cornerstone Group – and paid it taxpayer funds totaling $700,000.00 – to provide five years' worth of relocation services that have turned out to be "ineffective" and not "meaningful", as told to the court. We also remind everyone that State Senator Tony Avella called for a federal investigation of Cornerstone in relation to Willets Point, during a press conference held with another tenant group, the Willets Point Defense Committee, on November 20, 2013. Senator Avella did so again on February 28, 2014, as discussed below.
The Sunrise Cooperative lawsuit also attacks the IDA's approval of tax credits in the amount of $43 million for developers Sterling, Related and QDG, alleging that IDA overlooked "the requirement that a project is only eligible for financial assistance from the agency if the assistance is needed to induce the developer into completing the project," which was not the case for these developers and the Willets Point / Willets West project. We remind everyone that then-Comptroller John Liu voted against the $43 million tax credits as a member of the IDA board. Our thoughts on those tax credits – and our list of the other significant project costs that are rarely reported – are here.
The Sunrise Cooperative Petition also argues that NYCEDC and the developers did not disclose to the City Council, prior to the Council's October 9, 2013 vote to approve special permits necessary to the project, that the developers were seeking tax credits totaling $43 from the IDA – and that as a result, the Council's decision to approve the permits "was made before the full cost of the project was apparent", and therefore unlawful.
Finally, the tenants' court papers echo many of the same arguments made by other Petitioners in the separate lawsuit filed on February 10, 2014, concerning the fact that Sterling, Related and QDG intend to construct a 1.4 million square foot shopping mall on 30+ acres of property that is actually parkland, within Flushing Meadows-Corona Park – without obtaining state parkland alienation legislation, without any public review of the sacrifice of parkland for the mall, and without obtaining City approvals of the same.
Considering the significance of all those allegations and what is at stake for the Sunrise Cooperative Petitioners, we have to wonder: Why did they file their lawsuit on February 4, 2014, and then essentially keep it a secret for the past month? As of right now, no newspaper has yet reported on the tenants' lawsuit. It has only been mentioned in an online article published on February 14, 2014, written by Patrick Arden. We know first-hand that at least one big daily newspaper is aware of this lawsuit, but has deliberately backed away from publishing anything about it. Could it be, that the Sunrise Cooperative is merely attempting to leverage its lawsuit, to compel the City, NYCEDC, Sterling, Related and QDG to pony up substantial funds to facilitate relocation?
As if to emphasize the absolute mistreatment of Willets Point tenant businesses at the hands of NYCEDC, last Friday, members of the Willets Point Defense Committee – which is led by Arturo Olaya, and is not a party to either of the two pending lawsuits – held a news conference together with State Senator Tony Avella in his office. There, the press heard more horror stories of evictions, failure to relocate, and Cornerstone Group's continuing involvement at Willets Point. Below is the press release prepared by Senator Avella's office. Taken together with the Sunrise Cooperative's court Petition, it's clear that there is no fair treatment of Willets Point tenant businesses, and that reports of their relocation are greatly exaggerated. Mayor De Blasio, are you listening? 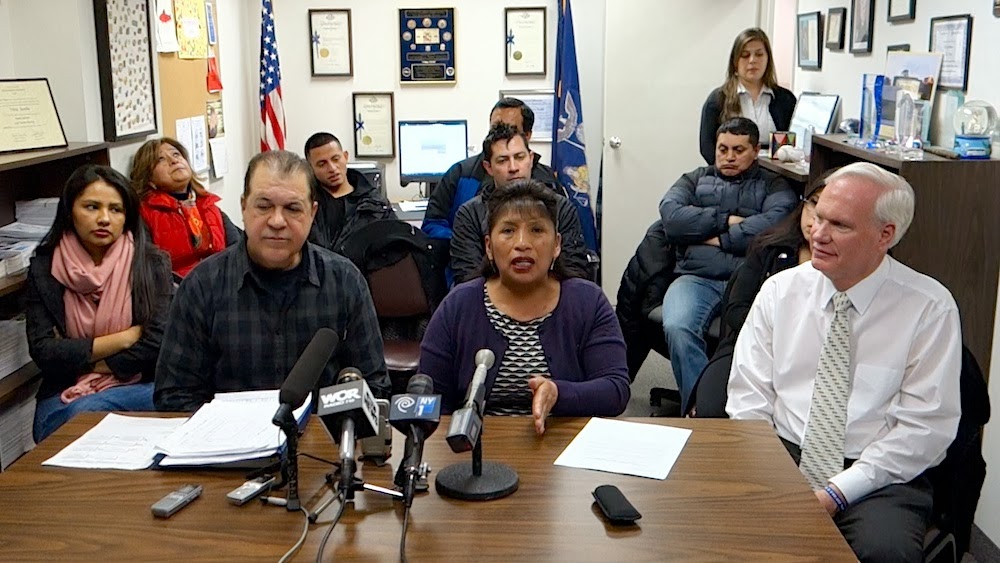 WILLETS POINT BUSINESSES STILL
LEFT IN THE DARK BY THE CITY
Senator Avella stands with Willets Point Tenants
to urge the City to reach an agreement
(Bayside, Queens, Friday, February 28, 2014) Today, Senator Tony Avella joined Willets Point tenant businesses who have not vacated from the premises, at a press conference urging the City of New York to come to an agreement and end their plight once and for all.
The business owners shared individual stories of being shunned by City agencies involved in the disagreement.
Many tenant businesses have not agreed to the deal proposed by the Department of Housing and Preservation (HPD) earlier last year due to minimal compensation offered, which does not even begin to cover the high relocation costs.
Since then, the businesses have joined together under the leadership of Arturo Olaya, a business tenant who has lead the fight in trying to come to a mutual agreement to safely relocate, in demanding that the City allocate better funding for the Willets Point tenant re-location. Unfortunately, not only has the City ignored their requests, some businesses continue to be shut down by the City Marshal without compensation or any resolution in sight.
“Some of my members do not have money to bring home and feed their families,” said Olaya.  “The City promised to relocate every business but many people are getting shut out of the process.  They expect us to move our entire businesses for $12,000 and then $6,000.  That is not enough money. What business can move with such a small amount? Now many businesses have been forced to close their doors, without any money at all.”
“Even though the City promised some money for the relocation, it was insufficient and at times, not forthcoming for these business who are struggling to make ends meet,” said Senator Avella.  “To make matters worse, the City marshal started showing up and padlocking some of these business. This is unacceptable.  The City is planning to give this property over to the developers, who could make a hundred million dollars, but yet they cannot take care of the hard working businesses that have been there for many years.  This really a disgrace.”
Ms. Tana Quillupangui, speaking on behalf of her mother who owns a business “Emanuel Corp” recalled when the City forced them to move out everything on January 1st despite having no place to go.

“They lied to my mother many times.  They told her that there are a lot of places in Queens where she can go but the reality is, there is no space in Queens for her,” said Quillupangui. “The City said that there is a place available for $1,800 a month.  When we went to see it, we found out that the space was not even for sale.”
Posted by Willets Point United at 11:58 PM