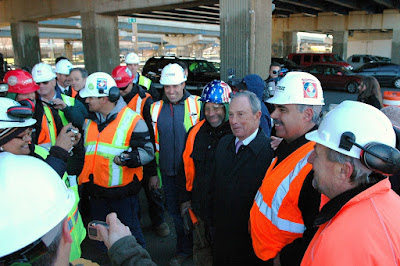 Mayor Bloomberg cavorts with employees of Cruz Construction -- the Holmdel, New Jersey firm that was awarded a $40 million contract to install sewer lines at Willets Point.

Earlier today Mayor Bloomberg snuck into Willets Point in order to do a photo op at the site of the sewer construction project-that has yet to be permitted by the DEC! He was so proud of this opportunity that there was no notice of the event last night on his official schedule-and the event took place close to the Flushing River where Willets Point businesses were not likely to take notice.
The photo op was also-with a tip of the hat to Robert Moses-premature since there are numerous legal and financial obstacles that face the city before this development can move forward. It is not surprising, however, that EDC would put the photo op horse before the permit cart-something it also did with the ramps off the Van Wyck. What this all indicates is that the city is desperate to show some progress-three years after the initial approval by the city council.

The permit application may very well run into a serious legal problem since-as our letter to the DEC highlights-EDC is violating the environmental justice guidelines that the agency has promulgated-Willets Point is in an "environmental justice area," which means that care must be taken-along with "enhanced participation"-to include all stakeholders in order to insure that a project doesn't have a disparate impact on minorities.

Since there are around 1800 Hispanic workers set to be displaced if the development goes forward we think there is reason to assume that there will be considerable disparate impact. But the photo op says it all. Take a close look at all the hard hats with the mayor-not a single black or brown face.

This dramatizes how the Bloomberg administration sees environmental justice as, "just us." And the fact that the city couldn't find a local firm to do the work underscores their mind over matter mindset-they don't mind and tax payers don't matter.
DEC Letter from Mike Gerrard

Above is a letter sent by WPU's environmental attorney, Michael Gerrard, of the law firm Arnold and Porter, to DEC.

The gist of the letter is that NYCEDC has failed to comply with the "enhanced public participation" process that is required by DEC Commissioner Policy 29, for NYCEDC's permit application to dump water from the construction site into the Flushing bay. The failures to comply invalidate steps that NYCEDC has taken thus far to attempt to obtain DEC's approval of the permit. Moreover, DEC may not even be entitled to grant NYCEDC's permit application, because the proposed work enables the Willets Point development -- which involves an adverse environmental impact upon an environmental justice area, which is contrary to the concept of "fair treatment" set forth within DEC Commissoner Policy 29. WPU has sent copies of this letter to State Senator Avella, Council Member Ferreras, and State Assemblyman Peralta.

How can you hold a groundbreaking for a project without having the necessary permits to do start the project and no guarantee that you will get them? 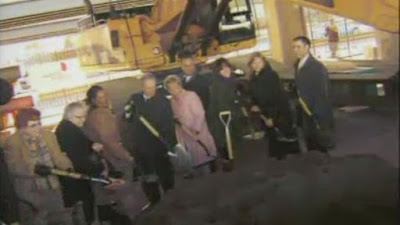 It's not just dirt they're shoveling!
Posted by Willets Point United at 3:55 PM