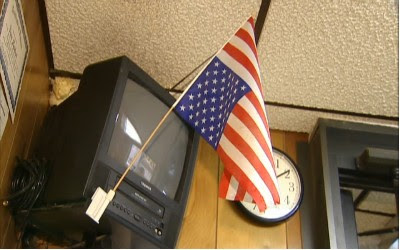 “This is not to disrespect the flag or America," says Jake Bono, "this is a symbol of when your property or life is in distress. Americans are supposed to turn the flag upside down in this way."

Bono sits in the office of the building built by his grandfather, the feisty and pugnacious 34 year old wearing a blue tee-shirt emblazoned with an upside-down American flag and the words: "Distressed Americans."

Another small upside down flag is hanging on the wall, and for Jake and his family business, Bono Sawdust Supply, you can't help see his frustration, disappointment, and shaken faith in our system that he holds so dear. He fears that he and his family's legacy will fall victim to eminent domain.

For 77 years, since his grandfather and two uncles founded the company in 1933, the family firm has manufactured saw dust for industrial uses. There are only a handful of such firms in the nation, and he says his is the last in New York State. Now the City of New York wants him, and other property owners, out of the 62 acre area known as Willets Point, a run-down and dusty industrial area in the shadow of the new Citi Field baseball stadium of the New York Mets. The government plans to rehabilitate the area.

Bono and 21 others are waging a long battle. The city government wants to tear down Willets Point, and build a new development of housing, parks, and recreation facilities. In order to do that, the city is threatening to use eminent domain against Bono and the property owners who refuse to sell.

"If it was a road or a hospital, or something that was needed," says Bono, "we would say we had bad luck and we would not be trying to hold on to what is ours," he says. "What it means to us is everything. It's everything that you work for...How could you not feel safe in our house? How could you not feel safe in your business, that one day the city, if they feel like putting something else there, could just take it away from you?," he asks, saying he should not be in the position of being forced to move his business.

"What we'd love to see, aside from not getting evicted at Willets Point, is for the state to change the law," says Richard Lipsky, a lobbyist and media consultant who advises the holdout property owners who have formed the group, Willets Point United. He says the state should "create a definition for what blight is, and what public use is, and offer some protections which don't exist under New York State law today."

While officials praise the planned development, others like Bono remain with a shadow over their future. He knows, under the law, that the government can pay him what is considered a 'fair market value" for his property, whether he likes it or not.

The Fox News segment (which does not yet appear on the website) will be running periodically on the air throughout the coming days.
Posted by Willets Point United at 10:41 AM