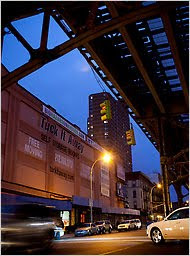 New York’s highest court handed Columbia University a major victory on Thursday for its $6.3 billion plan to build a satellite campus in Harlem, ruling that the state could seize private property for the project.

Nicholas Sprayregen owns four Tuck-it-Away Self Storage buildings in the area including this one at Broadway in between 131 St. and 132 St. The storage facility at left is on the land that is being taken over by Columbia University.

In a unanimous decision, the Court of Appeals overturned a lower court ruling that prohibited the state from using eminent domain to take property in the 17-acre expansion zone west of Broadway, known as Manhattanville, without the owners’ consent. The ruling held that the courts must give deference to the state’s determination that the area was “blighted” and that condemnation on behalf of a university served a public purpose, two ways that the project could qualify for eminent domain under state law.

Norman Siegel, who represented the losing owners, said he was “extremely disappointed” in the decision and would appeal to the Supreme Court. Although state law allows eminent domain to be used for educational purposes, he argued that it did not explicitly permit a private institution to benefit from it.

“The decision sets a terrible precedent regarding the use of eminent domain,” he said.

Still, the decision was not unexpected, said Michael Rikon, a lawyer who specializes in condemnation law and real estate litigation.

“It is virtually impossible to stop a condemnation in New York because of the courts’ deference to agencies’ determination,” Mr. Rikon said. “Even though the courts say they won’t be a rubber stamp, that’s in essence what they’ve become.”

The ruling does not bode well for property owners in Willets Point, Queens, a neglected neighborhood near Citi Field, who oppose the city’s effort to take their land for a redevelopment plan, Mr. Rikon said.

Those owners, who are considering a lawsuit against condemnation, contend that the area is blighted only because the city has refused to pave the streets properly and install sewers. But their current lawsuit challenging the city’s plan on environmental grounds is unaffected by the ruling.

“It’s time for the State of New York to do something about this,” Mr. Rikon said. “They should create a commission on eminent domain to revise the law.”
Posted by Willets Point United at 3:26 PM