Decision-makers confront Willets West mall developers' questionable traffic mitigation report, whose author has not committed to the "feasibility" or "effectiveness" of the alleged solutions it presents


The proposed Willets Point development was already considered a huge traffic generator back in 2008, when its size was limited to 62 acres of Willets Point property. At the time, traffic experts warned of severe impacts on many of the roadways that pass by and through Willets Point, should the development proceed. One such expert, Bernard Adler (former Traffic Commissioner of the town of White Plains), testified: "I have never seen this level of unmitigated impact, in the forty years I've been practicing."
Concerns about the traffic impacts of that original 62-acre project are well-documented (see http://www.trafficnightmare.org/the-future-with-the-ramps.html), and were intensified by the proposed project's location at the nexus of popular Queens roadways that are routinely used by daily commuters, and that are also the main routes serving both of New York City's airports.
Flash-forward five years – and now Mayor Bloomberg, Sterling Equities and Related Companies have expanded the proposed development from 62 acres to 108.9 acres, and added a 1.4 million square foot mall called "Willets West" to be built on parkland property located west of Citi Field stadium. As intolerable as the traffic resulting from the original 62-acre project would have been, it can only get worse with the addition of a 1.4 million square foot mall (which adds 950,000 square feet of retail space to the development).
The developers' new traffic report prepared for the present project (Chapter 14 of the current Draft Supplemental Environmental Impact Statement) describes future conditions if the development is built. The report includes separate analyses of "Non-Game Day" and "Game Day" traffic (naturally, there is more traffic when there is a Mets game at Citi Field). Since Sterling/Related are proposing to construct the Willets West mall and develop "Phase One" of the Willets Point property, let's see what the future traffic conditions will be if they do so and the roadways remain as they are now. Note that this example represents a "Non-Game Day", when traffic is less than when there is a game. 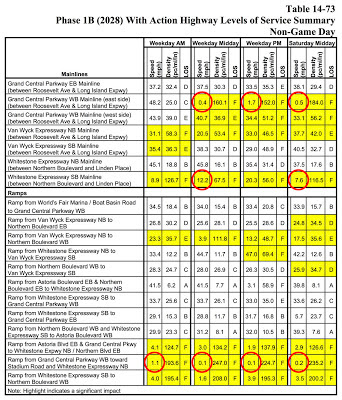 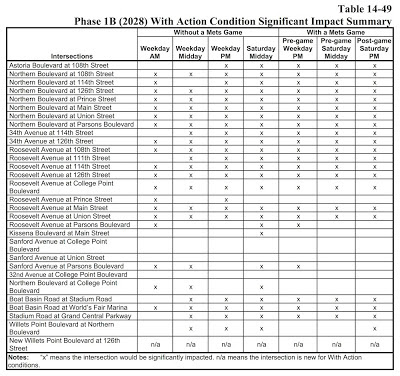 Or, as our own traffic expert, Brian Ketcham, puts it: "How can you justify so large a project with horrible traffic conditions reported in the Draft Supplemental Environmental Impact Statement? When faced with breakdown conditions in all directions can you honestly say that this project will not create huge traffic delays along access roads, spilling back onto the surrounding expressway system? Can you not admit that it will have a huge negative effect on this community, imposing greater traffic delays, more traffic injuries and deaths and other costly externalities, borne by the million motorists already passing by Willets Point each day on nearby expressways and arterials?"
Posted by Willets Point United at 8:19 PM