The following is the text of a self-explanatory letter, sent on Wednesday by Willets Point United Inc. ("WPU") to Ms. Jesse Adair of the New York City Department of Transportation ("NYCDOT"), concerning NYCDOT's admitted policy of withholding all roadway repair and maintenance services from the entire Willets Point neighborhood. We have received no response from NYCDOT.

I am writing on behalf of the membership of Willets Point United Inc. It has come to our attention that roughly two weeks ago, you spoke via telephone with an owner of New Mustang Auto Parts, located on Willets Point Boulevard in Willets Point, Queens, regarding complaints that he has made via New York City's 311 system, of sub-standard roadway conditions on Willets Point Boulevard and elsewhere throughout Willets Point; and his urgent requests that the New York City Department of Transportation ("NYCDOT") implement repairs and fulfill its responsibility to maintain these open and functioning roadways. The complaints were accompanied by photographs depicting the unacceptable consequences of NYCDOT's neglect.

It is our understanding that you told the complainant that NYCDOT refuses to implement any repair or to maintain any roadway within Willets Point, because NYCDOT claims that the entire Willets Point district is being condemned now for redevelopment. Please be advised that NYCDOT is absolutely incorrect.

First, the attached map shows the portion of Willets Point which the City is attempting to redevelop by 2016, commonly known as "Phase One". (The map is derived from page 7 of the City's Technical Memorandum 004 pertaining to the proposed Willets Point development project, which is accessible online at the web site of the New York City Economic Development Corporation.) 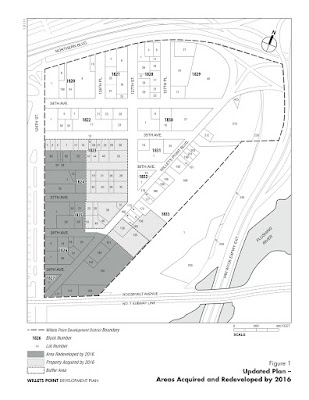 The portion of Willets Point which the City proposes to acquire and/or redevelop by 2016 consists of only 20 acres of the entire 62-acre Willets Point site. The City's published notice of eminent domain pertained only to those 20 acres, and no other property is being condemned. The overwhelming majority of the Willets Point site – more than 40 acres – will remain as-is for the foreseeable future. Accordingly, there is no legitimate basis for NYCDOT to withhold urgently-needed roadway repair and maintenance services from this area.

Moreover, the City's attempt to condemn 20 acres is presently the subject of legal challenges that will not be resolved by the courts for quite some time, and whose outcome is unknowable at present. It is inappropriate for NYCDOT to claim that the City's attempt to condemn 20 acres somehow justifies NYCDOT withholding urgently-needed roadway repair and maintenance services now, when the roadways in question are still very much in use here every single day, and will be for quite some time (and perhaps, permanently).

For the above good reasons, the membership of Willets Point United Inc. hereby seconds the complaints made to NYCDOT via New York City's 311 system by an owner of New Mustang Auto Parts, of sub-standard roadway conditions on Willets Point Boulevard and elsewhere throughout Willets Point; and we demand that NYCDOT implement repairs and fulfill its responsibility to maintain these open and functioning roadways, upon which hundreds of businesses and thousands of customers rely every day. We are New York City taxpayers, and will not tolerate denial of essential services by NYCDOT.

We note that on Monday, March 19, 2012, Mayor Bloomberg and NYCDOT Commissioner Janette Sadik-Khan ironically held a news conference less than half a mile from Willets Point, on Union Street in Flushing, to proudly display NYCDOT's new pothole and road paving machine (see attached image). But instead of displaying that machine during a self-serving news conference and photo opportunity, NYCDOT should actually use the machine at Willets Point to deliver essential services – and stop finding baseless new excuses to continue NYCDOT's decades-long blatant neglect and discrimination against the people of Willets Point. 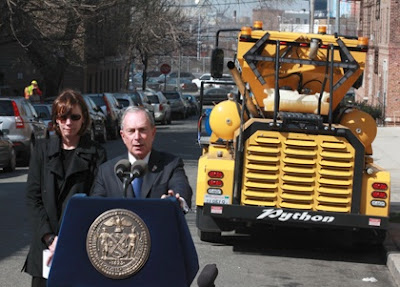 Thank you and we look forward to your response via reply email.

Posted by Willets Point United at 10:47 AM