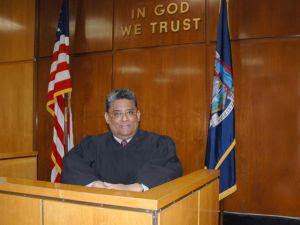 A Queens eviction judge is now among the long list of skeptics who have questioned the City's aggressive tactics against Willets Point property owners and businesses, despite the lack of any imminent development.

Former owners of certain Willets Point properties acquired by the City, as well as the owners of businesses that currently operate at those properties, are named as Respondents in eviction Petitions filed against them by the City of New York. City attorney Harold Weinberg has said that the City intends to formally evict the prior landlords, and then will offer a month-to-month lease to each tenant business.

On Tuesday, City attorney Weinberg pursued the evictions at a hearing in Civil Court in Jamaica, Queens held by Judge Leslie Purificacion (pictured). As the hearing began, Judge Purificacion realized that the evictions might relate to the proposed Willets Point development, of which he has heard, and sought to clarify that point. The judge asked Weinberg: "This is near Shea Stadium? Citi Field?" Weinberg replied in the affirmative.

Then, leaning back in his chair and crossing his arms in front of him, Judge Purificacion observed to Weinberg: "You guys are so anxious to get them all out of there, but now you've put the brakes on it [the development]". Apparently, Judge Purificacion found it difficult to reconcile the City's urgent request for evictions, with his understanding that the City has "put the brakes" on the development project.

Weinberg replied, most non-committally: "We hope to develop it in a number of years".

While Judge Purificacion correctly stated that the City has "put the brakes" on the proposed development (and there seems to be no choice but for the City to do so, given the lack of approvals to construct the Van Wyck ramps which are prerequisites for the development to proceed, myriad legal hurdles that still remain threats to the proposed development, and unfavorable economics), the judge is misinformed regarding other aspects of Willets Point. "It is a 'superfund' site, I believe", said Judge Purificacion on Tuesday – referring to the official federal and state lists of hazardous waste sites. But in fact, not only is Willets Point not a superfund site, but it has never even been nominated to be considered a superfund site. As renowned environmental attorney Michael Gerrard testified to the New York City Council on October 17, 2008 during the land use review process pertaining to the proposed Willets Point development:

"The City is proposing to destroy the community in order to save it. The only places where this kind of thing has been done, where entire communities have been torn down, are areas that are highly contaminated like Love Canal. There's been no suggestion that Willets Point is anywhere near that. And if it were, the City would not want to take title to it because of the liability risks that they would encounter if they were to acquire it. So the independent verification of contamination at this site is completely lacking."