DOS to Willets Point: Yes, We Neglect You 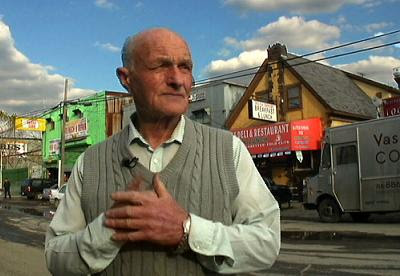 Joseph Ardizzone at his Willets Point residence, which according to DOS does not exist.

The New York City Department of Sanitation ("DOS") has finally admitted, on the record and in writing, what has been common knowledge in Willets Point – that DOS doesn't provide its sanitation services here.

DOS also denies that anyone lives in Joseph Ardizzone's Tudor-style house, located in the center of Willets Point – although Ardizzone has resided there for more than 70 years.

Recently, Willets Point United Inc. ("WPU") received a response from DOS to our Freedom of Information Law ("FOIL") request, which sought any records of various DOS services that are provided routinely to other neighborhoods, but which we don't recall ever seeing here in Willets Point despite our diligent payment of City taxes. The FOIL request covered the 15-year period from 1995 through 2010. Here's the most interesting excerpt of the DOS response:

Was DOS directed by any City agency or official to withhold sanitation services from Willets Point, or is DOS doing so on its own? In a follow-up letter regarding the FOIL request, DOS writes: "Please be further informed that the Department does not have any communications from any New York City agency, officials, or representatives concerning Department services at Willets Point between January, 1995 and July 13, 2010".

So: Not only does DOS not provide the sanitation services, but it appears that no City agency, official or representative has communicated with DOS to correct this – despite being asked to do so by Willets Point property and business owners.

And the public wonders why Willets Point appears as it does?