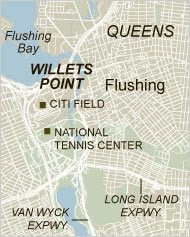 Even as the Bloomberg administration promotes the $3 billion development of Willets Point in Queens as one of its signature projects, state officials whose approval is needed have privately raised concerns over highway ramps crucial to the proposal and have questioned whether the development will ever get off the ground.

State officials have repeatedly expressed frustration with the city’s inability to provide reliable information and the pressure it was placing on them to expedite their analysis, according to a review of hundreds of e-mails involving the Willets Point project that were provided to The New York Times by an opponent of the project.

Michael Bergmann, a structural engineer for the State Department of Transportation who was part of the team reviewing the city’s application, wrote to the department’s regional director and other colleagues on Dec. 28: “Unless the preparers of this report start accepting the idea that it is seriously flawed, we are going nowhere.”

About a month later, after pointing out a mistake in a document that put the development’s completion date as 2107 instead of 2017, Peter King, a project manager for the state, wrote to a colleague, “Perhaps that reference to 2107 may have been closer to the truth than anyone realizes.”

By that point, the city’s Economic Development Corporation, which was overseeing the project, was pushing state officials to finish their work so that the ramps, which would connect Willets Point to the Van Wyck Expressway, could move on to the final stage of approval by the Federal Highway Administration.

“If I were a betting man, I’d start dropping the odds regarding success for E.D.C. on this project,” Mr. King said in an e-mail to a state transportation analyst on May 11. “Resistance seems to be building.”

He was reacting in part to a group of business and property owners in Willets Point who had organized an effort to try to derail the project. As part of that, the opponents had filed a Freedom of Information Law request with the State Transportation Department seeking copies of all communications on the plan, hoping to pry open a behind-the-scenes bureaucratic process the public often knows very little about.

They also were hoping the e-mails would provide fodder for their campaign. The messages — about 200 from May 2007 to May 2010, among State Transportation Department staff members, federal highway officials, city officials and private consultants — show the state’s concern about the safety, design and traffic impact of the ramps.

What seems unusual is the annoyance state regulators expressed with the work of the consultants hired by the city to work on the ramps’ design. The consultants submitted numerous written responses and clarifications to questions and sat with the regulators in several meetings, but still failed to satisfy them, the messages show.

This NY Times article scratches the surface, but does not describe how the involved agencies are rigging the process to ensure approval of ramps. The article also lets EDC spokesperson David Lombino get away with remarking that EDC routinely collaborates to optimize projects, which is contrary to information found in the responses to our FOIL requests.

But don't worry...more is coming to set the record straight!
Posted by Willets Point United at 9:44 AM