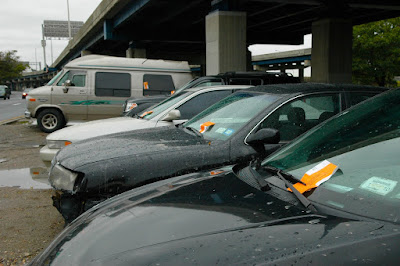 Very early this morning, parking tickets were written for about 15 cars parked under the Whitestone/Van Wyck overpass, right in front of Northern Boulevard. For decades, the overpass has been an area where parked cars are welcome. There is no sign anywhere prohibiting parking. Mets fans routinely park in this area when attending games, and are not ticketed for doing so. Construction workers routinely parked in this area during the years of constructing CitiField, and were not ticketed for doing so. Willets Point workers have parked in this area for decades, and have not been ticketed for doing so. Today's ticket blitz seems unjustified. Moreover, the vehicles ticketed evidently are those whose drivers arrived at Willets Point very early, to begin a long day's work –– some of the hardest workers in the City, who are modestly paid and significantly hurt by the unprecedented tickets.
Posted by Willets Point United at 4:36 PM